A day in El Escorial and Segovia

This past weekend I had planned a day trip to Segovia (a famous city about an hour away) with my close friend Zoa. I’m not sure if I’ve mentioned her or not on here, but she is a Spanish friend that studied abroad last year in Cincinnati and lives here in Madrid.

We started off our day around noon when she picked me up. We headed out of town to her village, where her mother (a huge equestrian) was participating in a horse-riding competition all day. We watched a bit with Zoa’s father and her grandparents, and then she and I left with her father.

Our first stop was El Escorial, a small village on the way out of Madrid.  El Escorial is a large royal monastery complete with gardens, courtyards, and many different rooms, and is famously known as one of the historical Royal Sites of the Spanish crown. On the drive there, Zoa’s father filled me in on a bunch of the history behind it. Technically speaking, the monastery is named San Lorenzo de El Escorial, and is a couple miles away from the town of El Escorial. It was build under the reign of Felipe II (Phillip II), who was a peaceful ruler that loved the arts, culture, and peace. Designed by famous architect Juan Bautista de Toledo, it was started in 1563 and finished in 1584. Situated at the base of the mountains, it was designed facing the south to be constantly in the sun. Spanish rulers would use this as a country retreat when feeling ill, needing to recover, or simply to get a breath of fresh air.

We drove up next to the monastery where Zoa and I got out and walked around for a few brief seconds. You can pay to go inside, but we had a lot of stuff to do so this wasn’t the highest priority stop for us. Afterwards, we all met Zoa’s brother at a very nearby (very) nice restaurant in El Escorial where we had a delicious meal. Our first course consisted of your typical Spanish olives, bread, and some plates of pulpo (octopus) and gambas, a larger type of shrimp or prawn. Our second course was a traditional meat from Segovia that I forget the name of. We finished with coffee and two desserts, one typical from Segovia and the other a chocolate cake.

After our delicious lunch Zoa’s brother went back home to study and the rest of us headed towards Segovia. It was only another 30 minute drive or so around the mountains. Segovia is mostly known for it’s completely intact 2nd century roman aqueduct, large cathedral, and the Alcázar castle.

We parked very near to the aqueduct and walked around that area first. It’s extremely impressive to see in person, and it’s no wonder how it’s the best remaining example of a Roman aqueduct in the world. Afterwards we started walking through town, stopping at various places as Zoa’s dad showed me a lot around the city. He’s an architect so it was awesome to have him around as a guide; he knew a lot about the design of different buildings and the architecture from this area of Spain. Once we reached the center of town we were next to the Segovia castle, which we took a while to go inside and visit.

The last stop we made was at the Alcázar of Segovia. Initially built as a defensive structure, it’s situated on a rocky cliff overlooking a river and some hills. The defining feature is its appearance as the bow of a ship over the edge of the cliff. Over time, the castle has also served as a prison, royal palace, and military academy. Currently it’s a museum and also houses the military archives. Interestingly enough, the church was one of the main inspirations for the Disneyland castle. While we didn’t go inside, we walked around the outside and had some fantastic views. Off to one side of the castle are the rolling hills I mentioned previously, dotted with houses, a few churches, and a monastery. Off to the other side is a great view back towards Segovia, with the town’s walls running alongside it and the cathedral poking up into the sky. On our way back towards the car we made our way through the Jewish quarter, a very famous neighborhood steeped in lots of Jewish culture and heritage. Finally, we were back at the aqueduct where we started and headed home, happy and a tad bit tired from an awesome day! 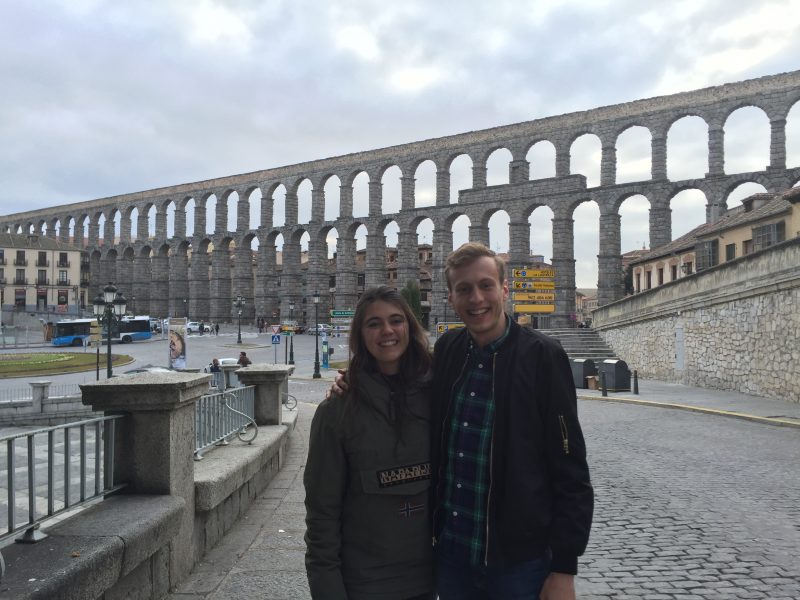 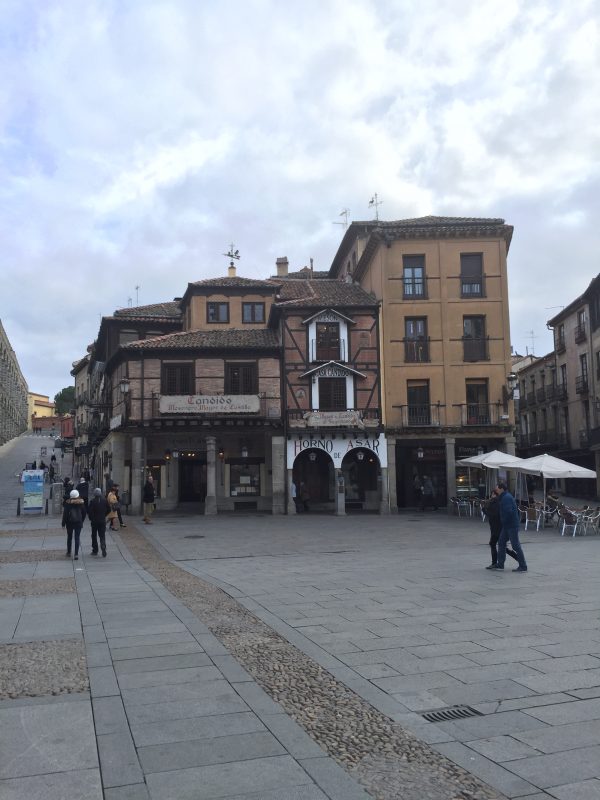 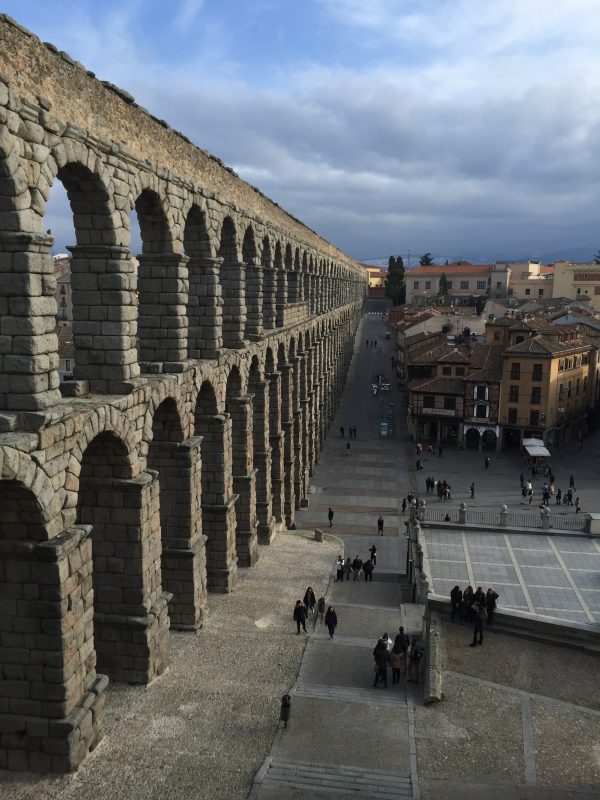 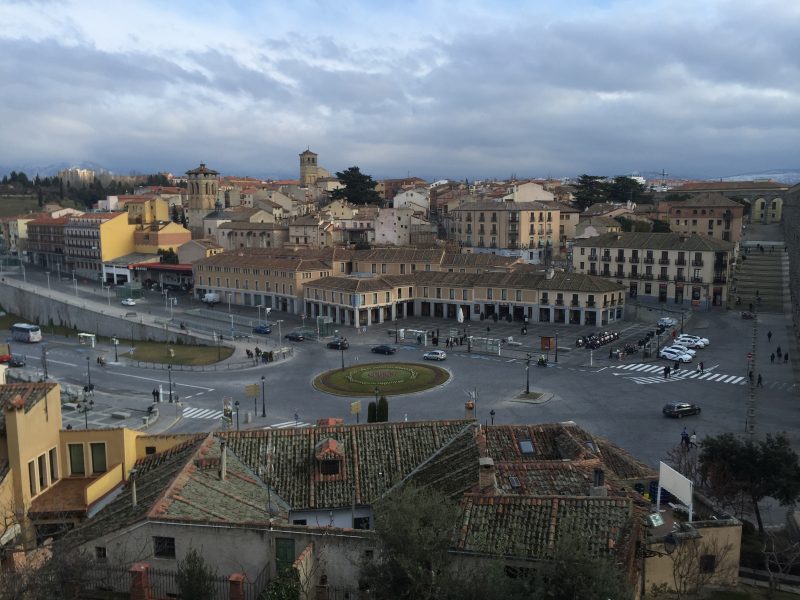 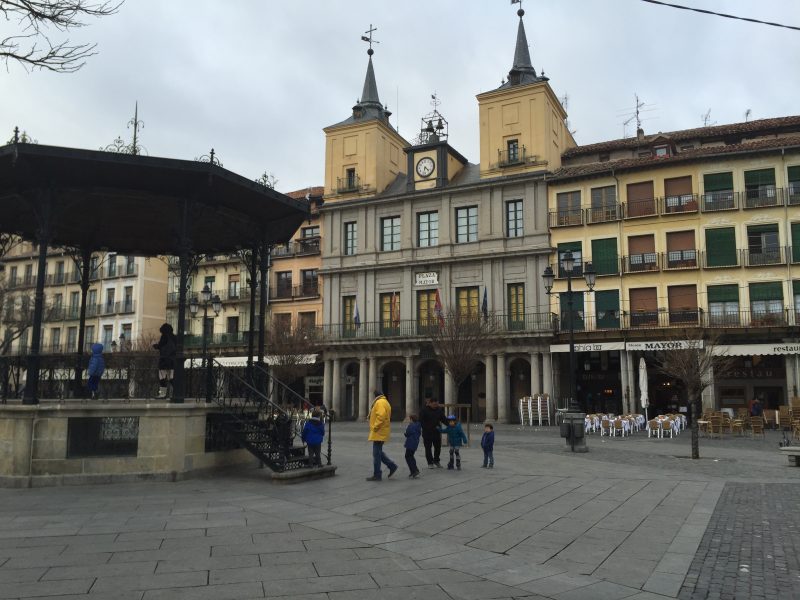 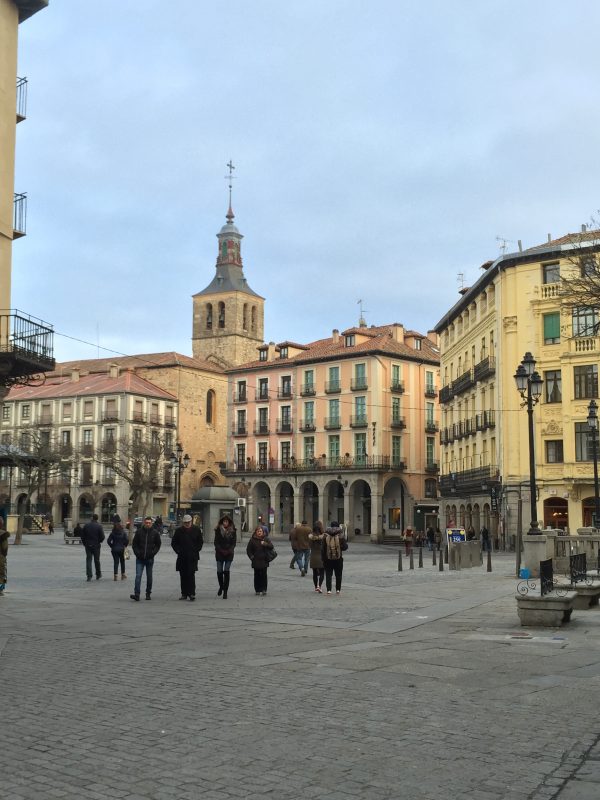 One thought on “A day in El Escorial and Segovia”