A day in Sintra

Hello, and welcome to my second post on my trip to Lisbon! As mentioned in my main post, the majority of Friday was spent in Sintra, which I felt deserved it’s own post due to the large amount of photos I took.

Sintra is a region near Lisbon (around an hour by train) that’s a hugely popular tourist destination due to it’s large amount of 19th century architecture and history. Situated in some beautiful, green mountains that meet the ocean, it became a popular vacation spot for royalty many centuries ago. Nowadays, as a result, the mountains are dotted with various palaces and castles all worth a visit, hence the very popular day-trip Sintra has turned into today.

Andrew and I took a mid-morning train from Lisbon, arriving to Sintra amidst some overcast skies and cheerful attitudes towards the day ahead. The train station was a short walk from the historical center of Sintra, so we immediately headed that direction. The first thing we noticed was how beautiful the architecture was everywhere we looked. Each building had mosaic or painted tiling, ornate decoration, and much of it was very well preserved.

During the initial walk, we quickly stumbled across the Sintra Town Hall, a beautiful building with a green- and white-tiled clock tower spire. Completed in 1910, it’s one of the newer buildings in Sintra, but it’s newness doesn’t look much out of place next to the rest of Sintra. According to Sintra’s official website, it was built in Manueline style architecture (also known as Portuguese gothic), a style we will see much more of today and in my next post on Belém. Nearby, at the town’s historic center, we found the Palace of Sintra, also known as Town Palace (Palácio Nacional de Sintra or Palácio da Vila). The palace was built on the site of one of Sintra’s two Moorish castles, although the castle was completely destroyed in the construction process. Construction started during the reign of King John I (João I) between 1385 and 1433. Initially, the palace was in the Moorish (Múdejar) style, but further building campaigns (especially under King Manuel I, with Portuguese wealth from the Age of Discoveries) blended Manueline and Gothic styles with the previous Moorish and Múdejar styles. It became the Portuguese royalty’s favorite palace and was inhabited continuously for five centuries, leading to it’s well-preserved state. As the palace was rather expensive to enter, Andrew and I admired it from the outside before continuing on to see more of the historic center. 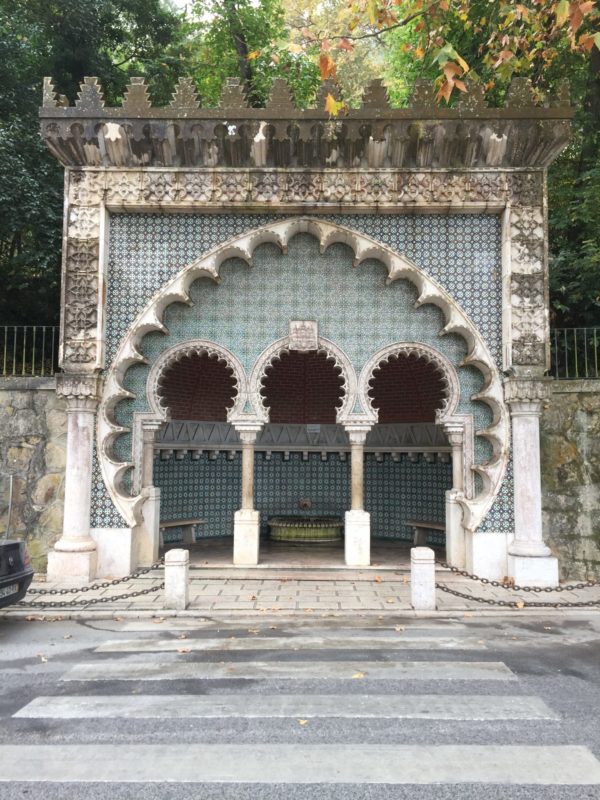 The majority of our day was spent at the Quinta da Regaleira, a famous estate and palace located nearby to Sintra’s historic center. Although the vast estate does contain its palace, there’s also a chapel, lakes, grottoes, caves, wells, fountains, and a vast park all ready to explore.

The estate was owned by various families throughout the years, but in 1892 the Viscountess of Regaleira sold it to António Augusto Carvalho Monteiro (nicknamed Monteiro the Millionaire for his vast wealth). Monteiro wanted to build a vast palace that reflected his life and his interests, so he hired Italian architect Luigi Manini and constructed the estate as seen today between 1898 and 1912. Monteiro, as a result of his odd collection of beliefs and interests, scattered lots of symbolism throughout the estate. This includes allusions to classical mythology, religion, alchemy, botany, Freemasonry, and the Knights Templar.

As I mentioned, the estate is a 4-hectare (about 10 acres) wooded park. Crisscrossed through the land are stone paths and stairways, with plenty of benches, fountains, and grottoes that make it easy to get lost as you wander. The Initiatic Well is described as a “subterranean tower” and sinks around 27 meters (~89 feet) into the ground. At the bottom, a tunnel system starts that connects the well with some grottoes, another well, some lakes and waterfalls, and the Portal of the Guardians. Sitting on the Terrace of the Celestial Worlds, the Portal is a large stone gate with two towers and statues, and hidden inside the portal is one of the entrances to the aforementioned cave system. 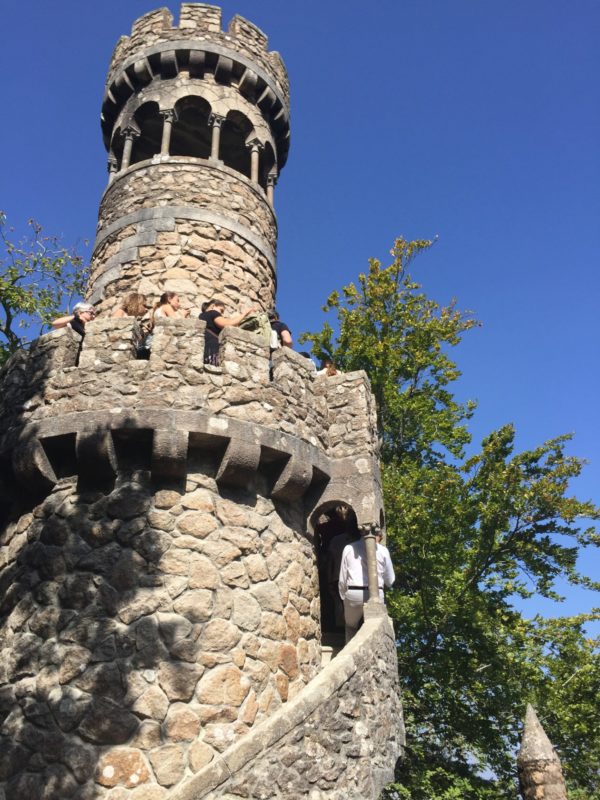 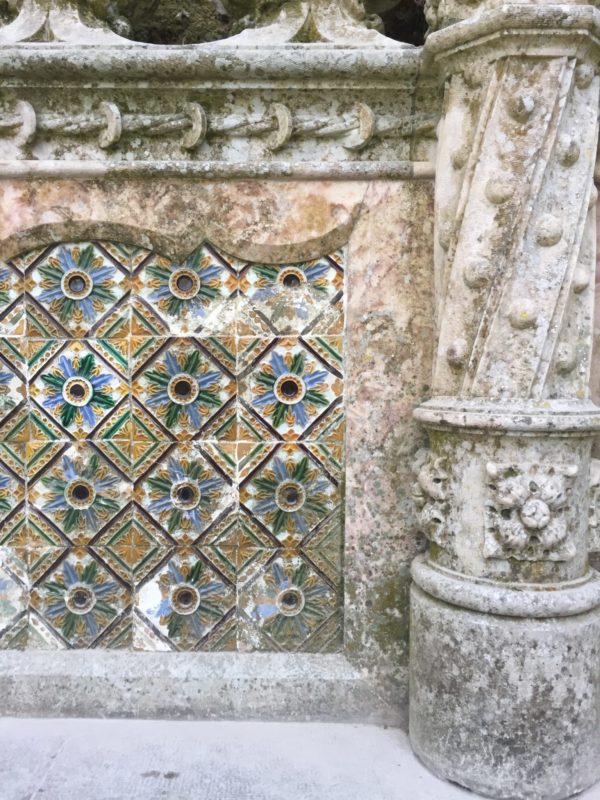 Nearby the palace you can find the chapel, which – you guessed it – was built in the Manueline style as well. The chapel is full of ornate tiling, stained glass, frescoes, and mosaics that all feature extensive symbolism. Much of it revolves around the life of Mary and Christ, although here you can see allusions to the Templars as well. In the crypt below there exists a hidden tunnel that connects the chapel with the palace, although it’s not open to the public.

The palace itself is a beautiful five-story building also built with Manueline influences, although it also features some more traditional Gothic architecture as well. Unfortunately, while the outside is a gorgeous sight to behold, the inside was a bit underwhelming. Much of the palace was closed when we went, and the few rooms that were open had little to no furniture, so the only things of interest were the ornate architecture and frescoes inside.

Leading up to the palace is the Promenade of the Gods, a beautiful avenue that features statues of classical gods as well as loads of beautiful plants and gardens. This avenue stretches along the length of the front wall that separates the estate from the road, with one of the main gates entering below the promenade.

Climbing the mountain: More palaces and a castle

After a few hours exploring the Quinta da Regaleira, we headed back in to the center for a quick but yummy lunch of a tostada and some homemade french fries before continuing our day. All morning we had been glimpsing views of the famous Moorish castle ruins on the mountain above us, so we finally decided to go check it out. The Castle of the Moors was built during the 8th century at the top of the Sintra mountains to help defend the area, and was held by the Moors until the Christians captured it in the 1147 Conquest of Lisbon. While the castle itself no longer stands, visitors can still stroll among the walls and have amazing panoramic views of Sintra and some of it’s palaces. Sadly, like much of Sintra, the entrance fee was a bit too expensive for our liking, so we just hiked up the mountain for the experience. Along the way up (and down) the mountain, we saw some great views of the now-sunny center of Sintra as well as the surrounding countryside.

In addition, although it was too also way expensive to enter, we saw a few short views of the famous Pena Palace. Standing on the peaks of the Sintra mountains near the castle, it was initially a chapel and later a monastery. Eventually disuse, combined with damage by both lightning and the Lisbon earthquake reduced much of the monastery to ruins. However, the Prince Ferdinand II acquired the land and ordered the construction of the modern-day palace, which occurred between 1842 and 1854. The palace is a bizarre-looking concoction of buildings, featuring a wide variety in architectural styles, and is one of the most famous examples of Romanticism. It’s one of Portugal’s most well-known locations, especially thanks to it’s bizarre color scheme – bright red, yellow, and pink sections combine to make this iconic palace.

After our hike, we slowly made our way down the opposite side of the mountain, taking in a few last views of the area before slowly making our way back to the train station and back to Lisbon.

As we didn’t enter the castle or the Pena Palace, I have included a few photos from the internet below. In addition, I added two photos of palaces in Sintra that were far and secluded and impossible to access by foot. Each of these photos are (obviously) not mine, so credit goes to each photographer that took them.