Christmas here in Spain is celebrated in a variety of different ways compared to the US, and living over here to experience much of it has been an awesome cultural experience. Catholicism has always been huge in Spanish culture and history, and its influence is visible on almost every aspect of Spanish life, with the Christmas holidays being no exception. One of the biggest changes is the addition of a holiday on January 6th (which is the Epiphany in Christianity), called El Día de Los Reyes Magos (the day of the Three Wise Men) and it celebrates the visit of the Three Wise Men with gifts for Jesus. Thus, it’s the Three Wise Men, and not Santa or Jesus, that bring kids presents.

When I booked my trip back home for the Christmas holidays I made it a point to get back to Spain in time to celebrate this holiday and see what it was like. It was really neat also to see the parallels and differences with American Christmas. I’m going to write a bit first on the traditions and background that I’ve been taught and then I’ll write on my experience and show some pictures at the end. I forgot to take a lot of pictures (no surprise there) but I have a couple to show. While the Christmas season has many cool traditions throughout all the days, I’m primarily going to focus on the celebrations around January 5th and 6th in this post.

Culture and Traditions in Spain

To give some backstory, Christmas Eve and Christmas (Nochebuena and Navidad  in Spanish) are celebrated here but it’s primarily a day to spend with family, have large dinners, and go to mass if you’re religious. The whole “American Christmas” with Santa and presents on Christmas is starting to become more popular with some families, but a large majority still celebrate the traditional way. Much like writing letters to Santa and visiting him in malls, throughout December and early January kids have different opportunities to visit the Three Wise Men with letters requesting gifts and proclaiming they were good all year.

When January 5th rolls around the traditional celebrations will start. There’s a variety of fun activities to take part in, but the biggest is the Three Kings’ Parade in the evening. Known as La Cabalgata de Los Reyes Magos in Spanish, it’s a huge parade centering on the Magi and their escort group. They’ll typically be riding horses, camels, or floats, and will throw out large amounts of candies that all the kids run around catching and putting in bags.  After the parade is over, kids are supposed to go home and go to sleep early so the Three Wise Men can start bringing them presents. Before going to sleep, however, the kids are supposed to clean their shoes and leave them out to be filled with gifts (essentially their version of stockings) and they can also leave out some water, cookies, and/or candies for the Three Wise Men, and also hay, water, and/or veggies for the camels to help entice the gift-giving (much like our milk and cookies for Santa).

The next morning kids will wake up early to (hopefully) find their shoes and living rooms filled with presents from the Three Wise Men – or, if they’ve been particularly bad, coal! After opening all the gifts, the typical breakfast is the roscón de reyes, which is the traditional pastry of Epiphany. It’s typically an oval-shaped cake that’s topped with sugar and dried or candied fruits, quince, figs and so on. One tradition of the cake is to hide a few things inside the cake while baking it. The first item is usually a little toy, small baby Jesus, or other trinket, and whoever finds it while eating is considered the “winner” or “king/queen” of the day. The second item is a dry bean or similar item, and whoever finds that is supposed to pay for the roscón  or the meal/party of the day.

The rest of the day is typically spent with families in the small villages having a large, traditional family dinner and exchanging more gifts.

For those unaware, I work with a family from my school in Getafe taking care of their two boys a couple times a week. I have been fortunate to meet such an amazing family as they’re constantly inviting me to do things with them and always teaching me more about Spain and Spanish culture. The family consists of parents Ana and Rúben, 7 year-old Miguel (who I have in my classes), and 5 year-old Álvaro. I was lucky that they also invited me to spend the Día de Los Reyes with them and their extended family and I ended up having a fantastic time. While Madrid has a bunch of large festivals, we stayed local and celebrated in Getafe most of the time.

On the fifth I headed to Getafe in the afternoon to meet up with them. We then went to Getafe’s football (soccer) stadium to see the entrance of the Three Wise Men. Every year the Three Wise Men arrive to Getafe via helicopter (yes, you read that right) and are greeted by the mayor and other dignitaries, and my family had never been before so we all decided to go and see what it was like. I only took photos on my Snapchat and forgot to save them, unfortunately. It was neat to see them land, and I learned some more detailed history on the Wise Men: while not mentioned in New Testament, the names are traditionally Melchior, Caspar, and Balthazar, and are supposed to represent kings of Persia, India, and Arabia, respectively.

After returning, we had an hour or two before the parade started, which we used to bake a roscón. Many families buy them from a grocery store or local baker, but this year Ana and Rúben decided to try to bake a homemade one, so I got to watch and see how it’s made firsthand. When it was finished we had a small slice for a snack before leaving again for the parade.

We had to park a ways away and walk to get to the center of Getafe. As we got closer I was amazed at how many people were there; Getafe is a suburb of Madrid with ~175,000 people, but the main street seemed as packed as a sunny Saturday afternoon in the center of Madrid on Gran Vía. I assumed that pretty much every family comes to this event considering how important it is. The parade went down the main street of Getafe right near my school, so we posted up nearby with some family friends of theirs. We were at the end of the route so it took a while, but once the parade finally started it was really cool. The first block of the parade traditionally is the majorettes, Rúben was telling me, and then after that were a bunch of floats with themes ranging from Finding Nemo, Frozen, pirates, castles, and so on. There were a variety of other people, including clowns/people on stilts, dancers, and the local firefighters. Rúben had told me beforehand jokingly that the people in the parade like to throw the candy really hard and he wasn’t joking; I felt like I was getting pelted with hard candies in the head and it was so bizarre! I kept thinking to myself if this ever happened in America some idiot would be suing the city the next day!

Finally, at the end of the parade came the Three Wise Men. They were riding camels and surrounded by lots of their “helpers”. The crowd, especially the kids, were cheering super loud and yelling to them saying different things. Once the parade ended we headed back and I split ways as I hopped on the train and they headed back home. 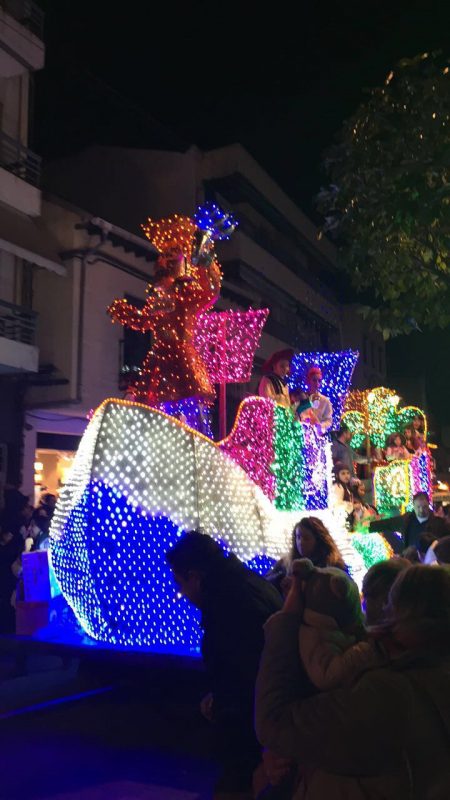 The next day I woke up early to again meet up with my family. For the Día de Los Reyes the family was celebrating with the whole extended family on Ana’s side in Pozuelo de Alarcón (or just Pozuelo), a quiet and very nice suburb in the west of Madrid. In addition to the four from Getafe, the family consisted of Ana’s parents, her two brothers, and their wives. I had met all of them except one brother and sister-in-law previously when they had come over and had coffee one night in Getafe and they’re an absolutely amazing and welcoming family.

After arriving the first order of business was to tackle the mound of presents in the living room. The present opening was a lot more chaotic than what I’m used to, but it was neat seeing all the kids open their toys and the adults get cool homemade gifts and clothes. The Three Wise Men even brought me a present – Historias de Ratones, one of Ana’s favorite children’s books that I had been peeking in one time. Apparently the Three Wise Men thought I had been good last year – or that I needed to practice my Spanish!

Presents were directly followed by the most important part of the day – the meal! Spanish people don’t mess around when they get together for a meal; it’s always a table full of different dishes and lots of wine, and every time a dish or glass is emptied another takes its place. We started with platters of Spanish hams, sausages, olives, salad, salmon, langostinos (prawns, basically giant shrimp), pâté, and bread. The meal continued with a couple main dishes, soup, followed by fruit for dessert, a slice of roscón, and finished with coffee and tea. I wasn’t timing it but I’m certain I was at that table talking and eating for at least two hours, and by the end I felt like I wouldn’t be hungry again for another three days.

After the meal we sat around for a few hours and talked. One thing I absolutely love about Spanish culture is their focus on relationships and the importance of family (a result of their polychronic culture). There’s something relaxing about spending an entire day just eating, drinking coffee, and talking with those closest to you instead of always running around and never living in the moment and enjoying your time. The first time I experienced a Spanish family meal with my good friend Zoa I was blown away at how different that aspect of Spanish culture is compared to the US, even for me, coming from a family where my parents raised me to really appreciate one another. I got to practice my Spanish a lot and learn new words, I chatted a lot with one of Ana’s sister-in-laws (who is German) about my time in Austria, and at the end of night Ana’s dad took me aside and showed me his sweet Mercedes in the garage and gave me a tour of the house.

If it wasn’t obvious before, the entire experience was extremely rewarding – not only because I got to learn more about Spanish culture and their traditions, but because I got to spend it with an amazing Spanish family that has been so gracious to me. My only remaining question after all of this – what should I ask the Three Wise Men for next year?