I’m back with my third and final post about my trip to Lisbon back in October! This will cover our last day in the city, which primarily was a day trip to nearby Belém. Belém (Portuguese for Bethlehem) is an neighborhood on the western side of Lisbon that’s famous for its high concentration of historic buildings and culture. Andrew and I made it a priority to get out there before we left and see what it was all about. Here’s a few of the things we saw, accompanied as usual by some photos!

If you missed either of the first two Lisbon posts, they can be accessed here and here.

The first thing we noticed after getting off the train was a beautiful pink-colored Baroque building that turned out to be the Palácio Nacional de Belém, or the National Palace of Belém. Built in the 18th century, it has housed various Portuguese royalty and presidents that have wished to reside further away from the urban center of Lisbon as the city has grown larger. Today it’s still the residence of the Portuguese President! Unfortunately, my only photo of the palace (below) didn’t turn out that well, so I’ve included a photo I’ve found off google as well to give a better picture.

Right next to it is the impressive Mosteiro dos Jerónimos, or the Jerónimos Monastery. Construction was started in 1501 and completed in 1601, 100 years later. If you’ve read my previous Lisbon posts you’ll remember the Manueline-style of architecture, and this monastery (as well as much of Belém) are some of the most well-known examples. The monastery and its surrounding gardens are absolutely gorgeous. It was home to the Order of Saint Jerome, also known as Hieronymites, a group of monks founded in Toledo, Spain in the 14th century. We decided not to go inside, as it was quite expensive for us to enter, but we walked around outside a lot and enjoyed the beautiful day. We had a small detour in the gardens out front of the monastery, as there was a small crafts market set up, which we had a fun time browsing. 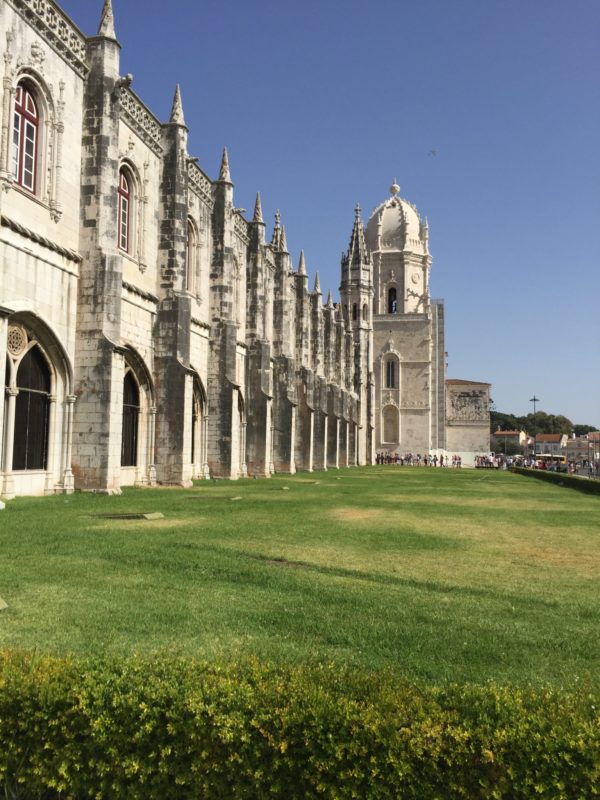 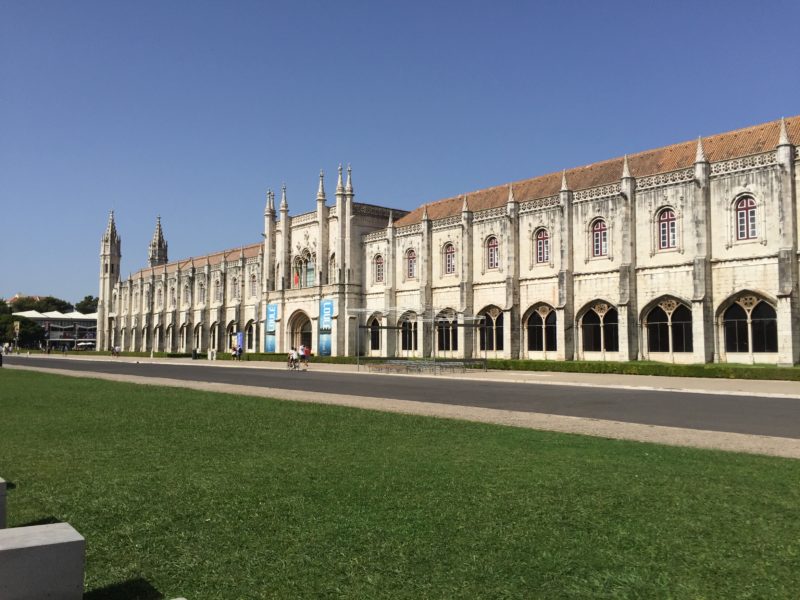 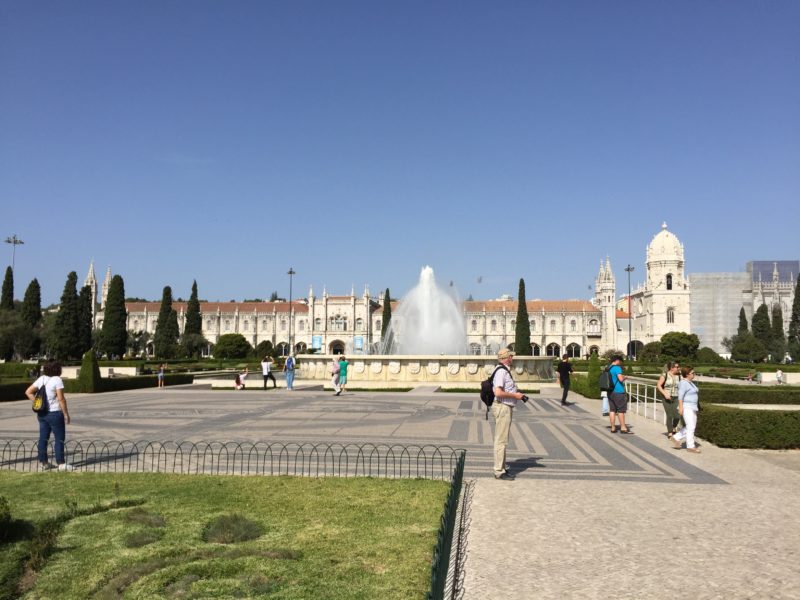 One of the most famous culinary symbols of Lisbon (and Portugal) are the Pastéis de Belém or Pastéis de nata. Before coming to Lisbon I had multiple Spanish friends/families in Madrid tell me I absolutely had to try these while in Lisbon. Paraphrasing from wikipedia: the pastéis were created by the aforementioned monks (the Hieronymites) in the 18th century. At that time, monks and nuns commonly used egg whites for starching clothes and would use the remaining egg yolks to make pastries and desserts as so not to waste them. In the 1820s the monastery was facing closure and began selling the pastéis at a nearby sugar refinery. When the monastery finally closed in 1834 the owners of the sugar refinery bought the recipe and it has remained in that same family ever since.

You’re probably still wondering what the pastries are, as I haven’t described them yet. They’re small, round egg tart pastries that are served hot from the oven, where you’re traditionally supposed to add cinnamon and icing or powdered sugar before eating them. While you can now find the desserts in many places around the world, as we were already in Belém we just had to stop at the original store! After waiting in a fairly long line we both bought a small box and confirmed that they were absolutely delicious! It’s no wonder they’re often ranked among the tastiest desserts in the world! Unfortunately, I was so excited to eat them I forgot to take a photo, but I’ve taken one from the internet to give you a feel what they’re like.

Arguably the most recognizable building of Belém is the Torre de Belém, or Belém Tower. Who can guess what architecture style the tower is built in? If you guessed Manueline, you’d be correct! The idea for the tower was conceived in the late 15th-century as the King John II believed the naval defenses of the city weren’t strong enough. A few decades later King Manuel started construction in 1515 and the tower was finished in 1519. The limestone tower was built using some of the stone that was (at the time) currently being used to build the in-progress Jerónimos Monastery. This limestone is known as lioz limestone and is a rare, beautiful variety found only in nearby Sintra. Throughout the years the tower saw lots of use and was improved and rebuilt a number of times. As a result of its historical importance and ceremonial significance, the Belém Tower (along with the Jerónimos Monastery) became UNESCO World Heritage Sites.

Finally, the last major stop we made in Belém was to see the Padrão dos Descobrimentos, or the Monument of the Discoveries in English. A relatively new monument, it was built between 1958-1960 to celebrate Portugal’s contributions to the famous Age of Discovery (sometimes called the Age of Exploration). Located on the bank of the Tagus river not too far from the Belém Tower, it stands 171 ft tall and was built to resemble the front of a Portuguese Caravel (ancient Portuguese ship) facing the sea. Featured on the monument are 33 different statues of famous Portuguese icons of the Age of Discovery, including explorers, royalty, scientists, artists, missionaries, and navigators. Sixteen statues appear on both sides, with the final statue – Henry the Navigator – standing on the front leading the rest. The square in front of the statue displays a large compass rose and map of the world on the ground, showing various routes Portuguese ships sailed. It was a gift from the South African government and was built with a variety of rare (and beautiful) limestone varieties. My family will especially like this cool fact I found online – it was featured in the 23rd season of The Amazing Race!

Visitors can ascend to the top of the statue and get amazing views of Belém, the Tagus river and Atlantic ocean, and Lisbon, and as the prices weren’t very high Andrew and I decided to go up. It was 100% worth it as the views were incredible! Lots of pictures were taken of the surroundings – take a look!