My first few days in Belgium

Hey everyone! As many of you know, I’ve been spending the last week or so in Belgium with my Belgian friend Xavier. Xavier spent a semester abroad at UC last fall and I was his mentor/buddy, during which he grew to be one of my closest friends. While he was at UC I promised that if I ended up back in Europe after graduating I’d visit him before I started working, so I kept my promise!

I’ve had a packed schedule since I arrived (as well as a packed schedule the next week and a half I have left here), so I’ll be splitting up my Belgium posts a few days at a time. As I cover each day I’ll write a bit about what I did and include a few pictures at the bottom. Some of the pictures are also available in higher quality on my flickr account, and I’ll probably add a few additional pictures there as well.

This post in particular should cover the first 4 days of my trip. Enjoy!

I left the States on August 16th and arrived in Belgium the morning of the 17th. Xavier was actually on vacation in Italy with his girlfriend until the 20th, so I spent the first few days with his more-than-gracious parents and brother, Olivier.

The first day wasn’t overly exciting, as I spent most of it trying to get to Xavier’s house. I flew into Brussels, the capital of Belgium, but Xavier’s family lives a few hours away in Verviers, a smaller city in the southeast near the German and Dutch borders. I wasn’t entirely sure how to get there; I just knew I had to take a couple trains and eventually someone would pick me up from the train station.

I experienced my first travel mishap early on, before I even left the airport. I bought a train ticket in (what I thought) was the right direction, but I went down the wrong escalator and ended up at the wrong train platform. There was no visible escalator or stairs going back up into the train station, so I took a nearby elevator and instead ended up in a long line of morning commuters trying to get out of the train station. The line had some intense security run by a plethora of Belgian military personnel as a result of increased national security, and a combination of this, my exhaustion from traveling, and having three bags with me was a bit overwhelming.

After I realized what I did and went through the line, I was able to finally get back into the station and end up at the right platform. Thankfully I picked the right train, and within an hour I ended up in the city of Leuven to switch trains. I had a bit of a “layover” (can you use the word layover for train stops?) so I quickly exited the station and found a Starbucks next door. Anyone who’s traveled abroad knows Starbucks and McDonald’s are amazing because they’re two locations that always offer free wifi. I managed to shoot Xavier a quick text of when I would arrive in Verviers, and then I headed back to the train platform.

Once I finally made it to Verviers I was greeted at the station by Olivier. I had met Olivier once before, when he visited Xavier in Cincinnati last year, so it was a welcome sight to see him again. He promptly took me back to their countryside home, where I dropped my bags off. I was starving at this point, so we went to grab a lunch of Belgian frites (the original french fries) with a kind of meatball called a boulette, complete with the popular Belgian beer Jupiler. After this, I spent the rest of the day napping and relaxing at home and hanging with Xavier’s family. My initial plans were to drop my bags and leave for a few days traveling Belgium solo, but I was so exhausted and decided to stay at Xavier’s house and just take smaller day trips while I waited on his return. That night I got to taste some authentic Champagne his parents brought home from France (amazing!) and I quickly learned his parents are impressive cooks, something I will miss greatly when I leave!

After messaging Xavier the previous night about what to do when he was gone, I decided that I wanted to go somewhere by myself with just my camera to take some pictures and have a more relaxed, laid-back day with no set agenda. I ended up choosing Maastricht, a city in the south of the Netherlands known for its medieval architecture, young university population, and for being the birthplace of the European Union. I had no clue what to expect from Maastricht, but after spending a day there I decided it was easily one of my favorite cities I’ve visited in Europe.

There’s not much to write about Maastricht, as I spent most of the day just wandering around, so I’ll let a few of my pictures speak as to how beautiful the city is. 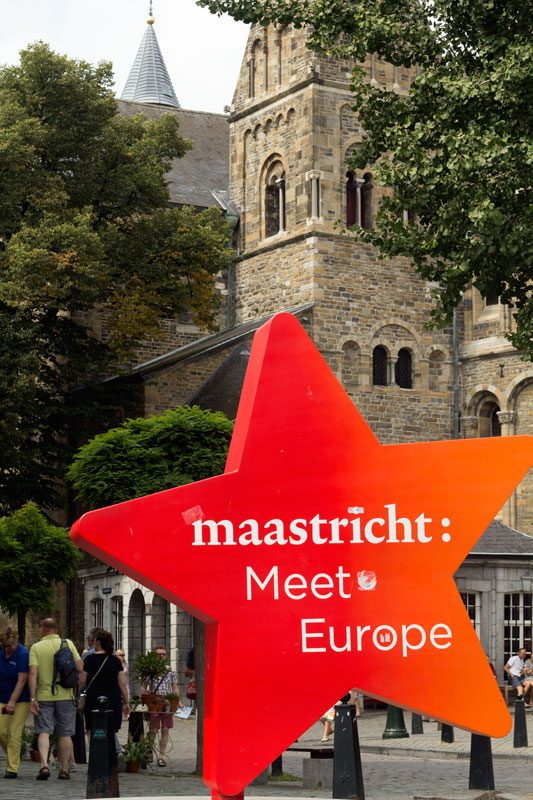 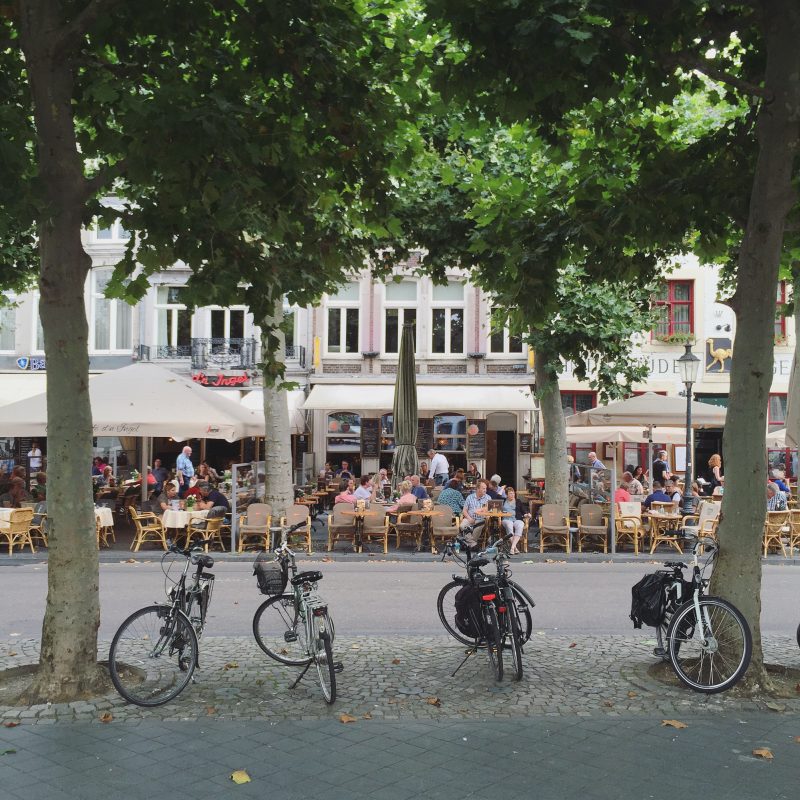 After Maastricht on Thursday, I was told that I would accompany Xavier’s mom on a trip the next morning, and that was all I knew when I got into the car and left. I was initially a bit nervous, as Xavier’s mom knows very little English (and I know no French), but we ended up having one of the most exciting days together thus far of my trip! It’s quite entertaining spending all day with someone trying to speak with basic phrases and using lots of pointing and pantomiming – we probably looked crazy to anyone watching us!

We first ran to a local butcher to get meat for the weekend’s BBQs (as it was supposed to be unusually sunny and nice all weekend). After that, Xavier’s mom took me around their province (Liége) to visit various spots.

The first place we went to, Signal de Botrange, is the highest point in Belgium at 694 meters (2,277 feet, for you patriots back home). The summit is a part of the larger nature reserve Hautes Fagnes (High Fens, in English). The park was a very unique ecosystem of subalpine bogs. It was especially astonishing that it was so different from the area Xavier lives in and yet it wasn’t that far of a drive. After visiting the Signal de Botrange location (including climbing a tower that reaches past the 700 m mark) we drove a few minutes down the road, parked at a small church, and walked a bit throughout the park.

The next location was Lac de La Gileppe, a large artificial lake and dam, and also a tower with an observation deck and restaurant up top. When we first arrived at the lake, I was trying to ask Xavier’s mom if you could swim or boat in the lake (using swimming motions), but I quickly learned from her funny reaction that the lake was a “clean” lake, supplying drinking water for the area as well as hydroelectric power. We went to the top of the tower and grabbed a local beer together before heading out. The rest of the day was spent driving back home, making detours through some small Belgian countryside towns. I got to see a few old castles and churches, including the church Xavier’s parents got married in.

Previously Xavier mentioned that he had a huge surprise planned for me Friday night, but I didn’t have any clue what was going on. Eventually, I got ready with Olivier and two of Xavier’s closest friends, and I found out I was getting taken to a Standard Liége football (soccer) match.

Standard is Xavier’s favorite football club, and in some ways, his own blood and life. Xavier got me to be a supporter of Standard when he was living in Cincinnati, and he promised me a match when I visited. Unfortunately, the only home match during my stay was a night he was gone, but he was still able to get me a ticket and had his brother take me. The match was against Charleroi, one of their most hated rivals, so it was one of the largest matches of the year.

After driving to the stadium and having some beers outside, we finally went in and found our seats. For anyone unaware, the passion and intensity fans show for football in other countries is unparalleled. Standard is one of the largest clubs in Belgium, with a stadium that holds almost 30,000 people, and they’re known for having extremely crazy fans. The highlight of the match for sure was when the team entered, as the crowd was going crazy with chants, cheers, and songs while they were lighting pyros and smoke bombs and unraveling large flags. The away fans are in their own block of the stadium and are separated by a giant fence, as football fans have a tendency to get into large fights before, during, and after matches (see the 2016 Euro Cup, when England and Russia almost got kicked out of the entire tournament due to so many fights between fans). Even with the fence, the Charleroi fans kept lighting giant fireworks and flares (think M-80s) and were throwing them both onto the pitch as well as over the wall into the Standard fans. Olivier noticed my surprise and said that it was normal.

The match itself was unfortunately quite boring, ending in a 0-0 draw that had almost no action. Xavier later told me it was the worst match Standard has had in a very long time, and that even a Charleroi goal would have been better than nothing. Even still, the atmosphere was amazing, matched by no American sporting event I’ve ever seen in my life, minus (maybe) a few very crazy college basketball games. The crowd was cheering and chanting the entire game, and I stress the entire 90+ minutes, without a break. Even at the end, as the crowd began violently booing and throwing beers at other fans and onto the pitch. I was told that it’s been a very lackluster season so far and many fans are discontent and want the coach fired, but despite all this I had a great time at my first Standard match!

Saturday doesn’t have much to write about, as the main feature was a party and BBQ in the evening held by Lauranne, one of the other Belgian students that studied with Xavier at UC. I attended the event with Dorsan and Emiel, two other Belgians that were at UC, and the night was a fun reunion of (most) of the original Belgian gang.

After a good night’s rest I caught a train and met up with Dorsan towards Brussels where we got picked up by Emiel. We drove to Lauranne’s, where we spent all night eating good food, drinking more good Belgian beers, and meeting many new Belgian friends.

Thanks for reading the first of my posts on Belgium! Be on the lookout for my next few posts this week, including the next Belgium post (which will start when I finally reunited with Xavier) and my September playlist!

One thought on “Belgium, part 1”