This past weekend I spent a couple days in Berlin with Ali, a friend also in the BEDA program here in Madrid. We had a 3-day weekend and decided to plan a trip together and ended up choosing Berlin primarily due to cheap flights. After factoring out travel time we essentially had two full days in Berlin, which we tried to fit in as much as humanly possible. While we didn’t have any initial goals, the trip ended up turning into a mixture of exploring the city (and it’s history) and eating lots of good food. Berlin is a very cosmopolitan and international city so we took advantage of that fact by searching out things we can’t easily get in Madrid (read: coffee!). Unfortunately a day before leaving Ali started feeling sick, so we had to relax our pace a bit, but nonetheless it was an amazing trip! Berlin easily joins London as a city in Europe I could easily see myself living in someday.

We flew out Thursday evening, and already started off the trip on a memorable note: much like my London trip, we came within minutes of missing our flight. After rushing from work to the airport, getting through security, and Ali wanting to grab a quick snack before boarding, we rushed to the gate only to see the sign read “BOARDING CLOSED”. Thankfully we were able to still board the plane, but reading that sign definitely gave me a miniature heart attack.

We arrived in Berlin around 11 pm and started to make our way to the hostel. More transportation issues ensued as I couldn’t find the right train we needed to take; almost an hour later after wandering around we found out the train we needed to take was closed for construction, so we finally just took a taxi. We checked in to the hostel and went to bed, determined to get an early start Friday.

Originally we planned on taking a city tour today, but we woke up and were greeted by rainy weather, so we decided to postpone the tour until the next day hoping for better weather. A lot of trip ended up being guided by the “Oooh, Berlin” maps (you can view them here if you are interested) which are maps created for different neighborhoods of Berlin with suggestions of the best cafes, restaurants, stores, and sights to see. They’re created by locals and are extremely authentic, and we ended up choosing every single one of our meals from these maps and loved every single place we visited. One of these maps existed for Friedrichshain, the neighborhood we were staying in, so we chose a place called Silo Cafe for breakfast. Ali ordered a black tea and me a coffee, and we both got the breakfast titled the “Toastie”, which was an Australian breakfast of toast with melted cheese and bacon and some greens on the side.  A very hearty, delicious start to our day!

The majority of the day on Friday was split between shopping and walking around downtown. A couple clothing stores like UNIQLO and Topman don’t have a store in Spain and I was in need of a couple more shirts/sweaters, so we visited these and a few others. Some of the sights we saw included in the Berliner Dom (Berlin Cathedral), museums like the Atles Museum, Alte Nationalgalerie, and Neues Museum, and the Gendarmenmarkt, which features the Berlin Konzerthaus, French Church, and the German Church. The next day on the tour we revisited the Gendarmenmarkt and learned some of the history, but I’ll cover that later. While walking in Mitte, the neighborhood containing most of these sights, we came across Fassbender & Raush, one of the world’s premiere chocolate stores. We took a look inside and were thoroughly impressed; the store has giant chocolate statues of many Berlin monuments and churches, an airplane, and the titanic, among other things.

After leaving the chocolate store we continued wandering around, where we accidentally stumbled on the North Korean embassy, one of the funnier sights of the whole trip. We googled the international relationship between the two countries only to find that back in 2008 North Korea was short on money and converted part of the embassy in Berlin into a hostel where guests could stay. I don’t think I’d ever choose to stay there, but it’s nice to know the option exists, right?

We found a mall and did a bit more shopping before wandering up to the most recognized symbol of Berlin, the Brandenburg Gate. The tour we were going to take starts at the gate, so we knew Saturday we also would get a chance to see it again, but we wanted to get a quick sneak preview and also take a few pictures. By this point it was nearing the evening and we were both a bit wet and cold, so we pulled out our handy maps and headed to Tak Tak, a small Polish street food restaurant where we ate a selection of Polish dumplings. Ali had been wanting to try them, and considering our proximity in Poland we figured it was a good time to try. We then headed back to our hostel so Ali could take a nap and rest up a bit.

The decision was made to have a more low-key night, so we found a couple cool bars nearby the hostel (via the maps, of course!) and decided to try them out. The first bar, FRANC, was a small craft beer bar and crêpe place that had on tap their house-brewed beers, as well as different beers in bottles. We grabbed a beer and Ali ordered a cinnamon-sugar crêpe and relaxed for a while. The next bar we had in mind was a 15 minute walk away, but once we arrived we found out it was about to close! We left our handy maps at the hostel so we spent the next half hour wandering around trying to found somewhere that looked appealing, only to finally give up and head back to turn in early as Ali wasn’t feeling the best.

The second day was filled mostly with the ~2.5 hour city tour we took. We decided on grabbing breakfast and then trying to make the 11 am tour. Breakfast Saturday was at Spreegold, where we both got the Canadian Pancakes: pancakes with bacon, grilled banana, and assorted fruit. Pancakes (and maple syrup) has been something I’ve really missed in Spain, so this breakfast made me quite the happy person.

Next up was the tour, put on by SANDEMANs, a group that puts on amazing free tours in cities across Europe (we had previously done the Madrid tour when we first moved here and loved it). This time around our tour guide was Mark, a witty Brit that loved history. The tour focused on the history of Berlin through the ages. As most people should know, Berlin (and Germany) has had some dark times in history (as have most countries), but Mark was very upfront and straightforward about discussing the history and explaining all sorts of details, something a history buff like myself loved. He explained how it’s very important to discuss what happened, no matter how uncomfortable, to stay informed and prevent anything like the Holocaust ever happening again. Some of the tour highlights included:

Later, at the end of World War II, the gate symbolized endurance and strength. While most of Berlin was bombed and destroyed during the war, the heavily-damaged gate managed to survive. After the construction of the Berlin Wall (which ran right behind the gate) it was a picture of division and separation for the duration of the Cold War. Finally, it’s became a symbol of peace and unity, not just for Germany but for Europe as a whole.

Almost 3.5 million Germans immigrated to West Germany in this way (20% of the population), and this included many skilled workers and educated Germans, which significantly hurt East Germany’s economy. On August 12th, 1961, GDR officials signed off to close the border, and overnight the wall was erected. 13,000 soldiers erected a fence – literally overnight – surrounding all of West Berlin, and within the next week a more permanent wall was put into places. Families were split, border-crossing workers lost jobs, and the world would be changed significantly as the wall would stand 28 years until it’s fall in 1989.

Nowadays the square has a memorial to the book burnings. A glass pane in the ground looks down into a memorial, an empty library room with empty book shelves. It was quite muddy and foggy so it was a bit harder for us to get a look. A plaque nearby also has a chilling quote from Heinrich Heine:

“That was only a prelude; where they burn books, they will in the end also burn people”

Wildly enough, that quote is from 1821, a century before the Nazi party’s emergence. The entire tour as a whole was extremely eye-opening. Regardless of political beliefs and opinions, a lot that’s going on today in our political has some parallels to a lot Ali and I saw on our tour, and it left us it deep thought for a while.

After the tour finished, we had a few places we wanted to hit up before daylight ended. We first took a walk past the Brandenburg gate into Berlin’s Tiergarten, Berlin’s largest park, and saw the famous Reichstag building, which houses the German Parliament.  The other biggest remaining goal was to see the East Side Gallery, another intact portion of the Berlin Wall that’s been painted on by artists and muralists. The general theme revolves around peace, with much of the art featuring pieces about walls, doves, chains, and Cold War personage. We followed the entire wall, looking at the art and taking pictures, before heading across the river (walking across the Oberbaum bridge) into some more “hipster” neighborhoods. We stopped at Eliza, a small tea cafe for a cup of hot chocolate and chocolate chip cookies before grabbing dinner at The Pit, an American BBQ joint owned by a Texan who brought his grilling equipment straight from Texas. I ordered the 18-hour smoked beef brisket with some coleslaw and was thoroughly happy with the dinner choice. 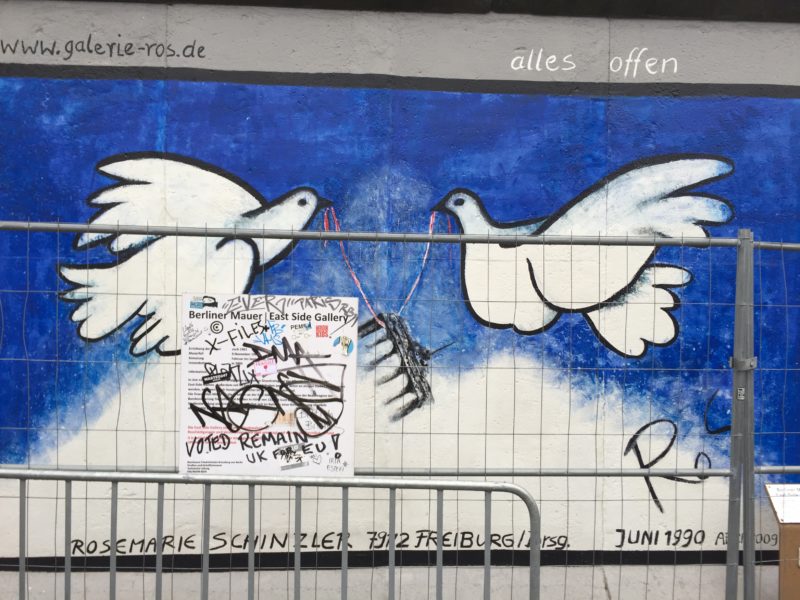 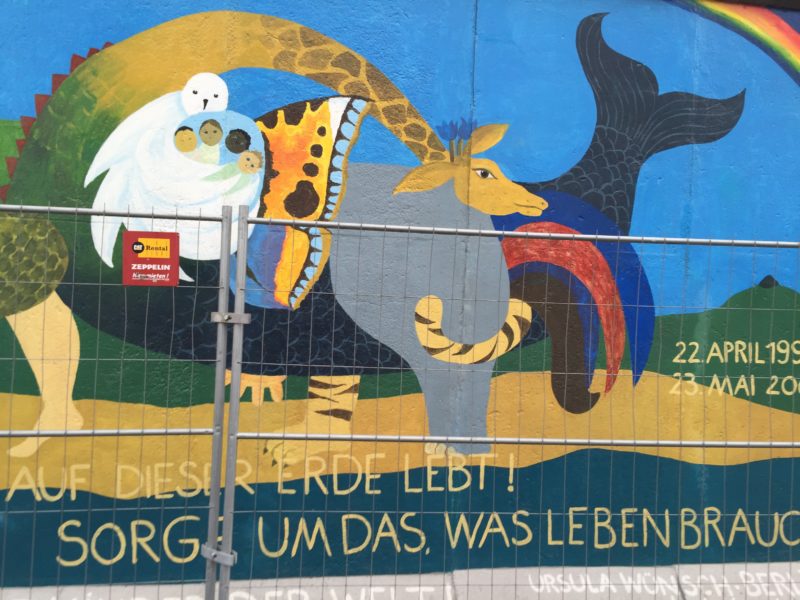 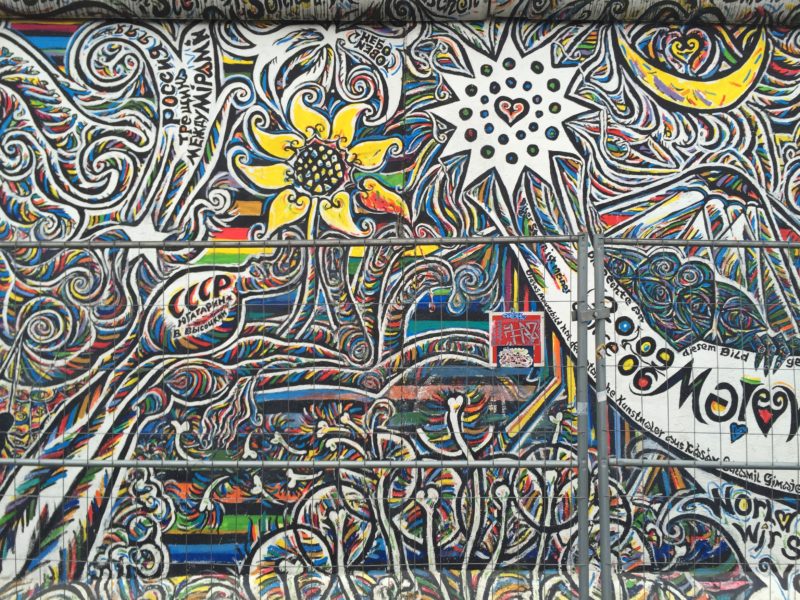 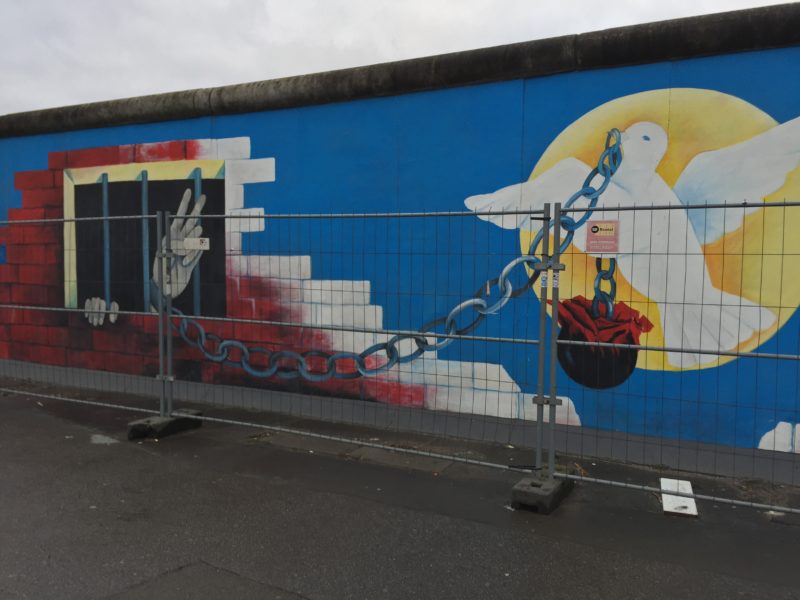 At this point Ali and I were freezing and it was nighttime, so we spent the last few hours in another map-recommended joint, Not Only Riesling, a cozy and upscale wine bar. Ali got a glass of a red Spanish-blend (ironic, I know) and I had a delicious glass of a German Riesling as we sat and talked over a platter of cheese, bread, olives, and spreads. The bar wasn’t too expensive and might have been my favorite place we visited on the trip.

Our plane flew out at 7.30 am on Sunday, but we had already checked out of our hostel (to save a night’s money), so the rest of the evening was a very long, uncomfortable wait to finally go home. The initial idea was to go out all night to bars and a club, but with Ali’s sickness she just wanted to rest as much as possible. We spent a few hours laying on couches in the hostel’s common room before heading to the airport around 4 am, and then spent a few more hours trying to sleep in the airport before finally going back to Madrid – and our own beds! All in all, the trip exceeded my expectations. Berlin seemed like a city I would love to spend a few months there, exploring every small cafe and restaurant. Hopefully I can go back sometime when it’s warmer – and greener!