Hey everyone! One of the topics I’ve wanted to write about on my website is cooking, considering it’s something I enjoy doing, so this is my first time finally sitting down and throwing something together. This won’t be a super regular thing, but rather something I’ll do from time to time when I have something I want to share.

Anyways, this specific post I wanted to write about a couple new recipes I’ve been trying recently. One of the biggest hindrances to trying out different and more complicated recipes back in the US was the cost of food and the lack of time I had while studying, but fresh foods are extremely cheap here in Spain (usually, anyways, although I also can’t find a lot of foods that I could back home) and I have a bit more free time some nights to cook meals, so I’ve been pushing recently to try lots of new foods.

The first new recipe I tried a while back was a lentil soup. I took the initial recipe from the internet, so instead of copying the entire recipe I’ll just post the link below if you are interested. It’s a great veggie-rich soup that isn’t hard to make.

I ended up making a couple changes between reading through comments and also being limited in what ingredients in I could purchase. I added double the amount of carrots, doubled all the spices, and used a chicken broth mixture instead of the 8 cups of water. It turned out well, although if I were to ever make it again I would add some additional veggies (maybe potatoes?) and a meat (sausage or beef). I also didn’t like the broth mixture as the soup base, but I think that was more my fault for trying to experiment too much. Either way it still turned out quite well. The soup went very well with fresh bread, and another online comment suggested adding cheese on top, although I didn’t try it this time around. 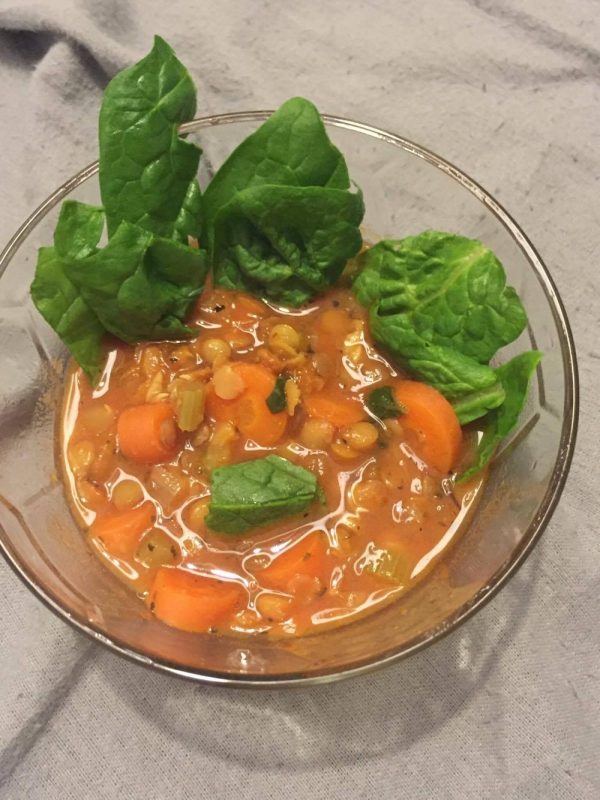 Chicken-friend rice is my current obsession. I’m making some rice-based dish for almost every meal right now. Thankfully it’s something that can be altered a lot to individual taste, so I’ve really experimented with this one. I initially followed the recipe that is linked below, which mixes up some rice, chicken, egg, and onion, and it turned out alright, albeit a bit bland. Tonight I cooked a large batch and further experimented. I julienned a green and red bell pepper and threw it in with the onion which was a perfect addition. I’ve also been using more rice than called for, so I’ve needed to add a lot more soy sauce, but I tone down the cracked black pepper a bit. I’m having trouble getting it to be extremely full of flavor which is because I ran out of soy sauce and think I needed to still add more.

Eventually I’ll probably use this love of Asian foods and whatnot to experiment with stir fry, noodle dishes, etc.

This last one isn’t a recipe as much as experimenting with basic ingredients to see what goes well together. I’m also not sure if it’s technically pasta salad…pasta dish might be more appropriate. Anyways, this idea started when I was dining a few months ago with a Spanish family that I work with and part of the meal was some pasta that I found extremely delicious. I ended up asking the mom how she prepared and said it was really just pasta with some random ingredients thrown together. I took what she told me and began experimenting by taking some out, adding some others, etc. I’ll list below all the ingredients so far I’ve tried, and if you’re interested you can make your own combination based off that. So far I’ve made a variant of this twice for two different parties I’ve gone to and it’s gotten an okay reception.

The amounts can be adjusted to personal desire and/or the total amount being made. I’ve also considered adding a cheese to it, but I haven’t decided what cheese would taste good with it. I also would like to try another olive, but most stores around here only carry standard green olives and some black ones. If anyone has any other ingredients to suggest to add in, please let me know in a comment below!