Lisbon and the beaches

Welcome to another one of my travels! This past weekend I went to Lisbon, Portugal, with my friend Andrew. It was a holiday weekend here in Spain which usually means the perfect time to take a trip. I hadn’t been to Portugal yet and I have a good friend studying there this year so I figured why not take advantage of that and knock two birds out with one stone.

Throughout my few days in Lisbon we split our time between exploring the city of Lisbon itself and doing nearby day trips. Two of these side-excursions I’m going to put into their own posts to help split up the content into more manageable chunks – both for myself and for you! Anyways, without further ado, I present to you…

Our first day of the trip was Thursday, when we woke up around 5 am to catch our ride out of Madrid towards Portugal. We used BlaBlaCar to get to Portugal, which is a ridesharing website that’s super popular here in Spain and much of Europe. Drivers can post upcoming trips they will take, how many seats are open, and then others can ride with you for a fee. It’s a nice alternative to buses or trains that is often cheaper, faster, and gives a chance to meet some cool people along the way.

We finally arrived in Lisbon right after noon, and first headed towards Andrew’s hostel to check in and drop bags off. My friend Manuel was busy with school Thursday afternoon, so we had a few hours to ourselves to explore. We didn’t do anything crazy during these two hours as we were tired already from waking up so early. Initially we walked from the hostel down towards the waterside district Cais do Sodré, with a couple neat views of Lisbon along the way. Lisbon is situated on the mouth of the Tagus river and is nestled among the mountains, which explains a lot of the layout of the city. There’s lots of lookouts all over city, offering amazing views no matter where you are, and is also the reason for Lisbon’s iconic yellow funiculars that are on nearly every postcard and famous photo of the city.

Once at Cais do Sodré, we grabbed some snacks and a beer and sat on the edge of the pier relaxing and enjoying some views of the river, bridges, and hills. Across the water we could see the Santuário de Cristo Rei, a statue of Jesus inspired by Rio’s Cristo Redentor, and Lisbon’s Ponte 25 de Abril bridge, a red suspension bridge that is often compared to the Golden Gate Bridge as they look nearly identical.

After a while relaxing, we decided to take advantage of our unlimited metro pass for the day and headed up north to one of the football stadiums in Lisbon. Lisbon has two major teams – Sport Lisboa e Benfica (or just Benfica) and the Sporting Clube de Portugal (or just Sporting). Benfica’s stadium was a bit far out but we spotted Sporting’s stadium on the map with a nearby metro station so we decided to give it a look. Afterwards we wandered the surrounding neighborhood, finding a neat park and the Universidade de Lisboa to walk around, before heading towards the university of my friend Manuel to meet up with him after his classes ended. 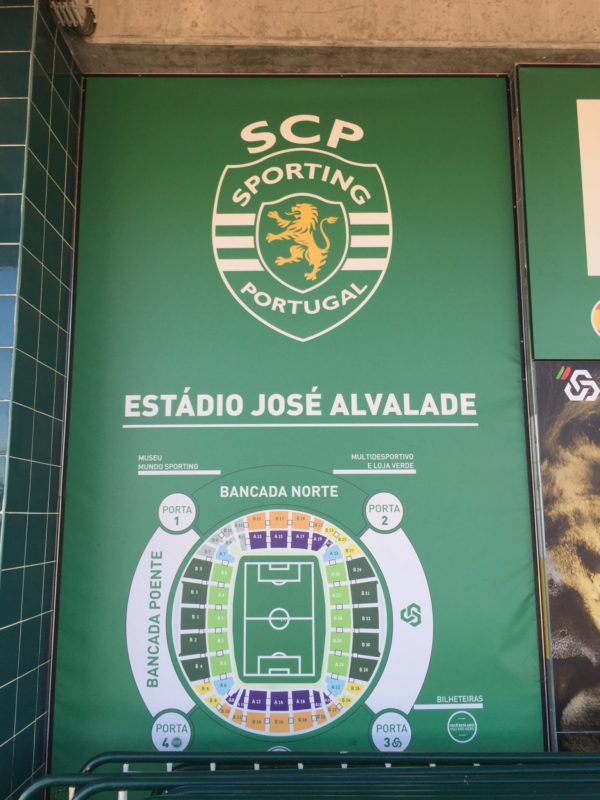 Once we finally met up with Manuel, he showed us around a few of the more important areas of Lisbon. From his university we headed towards the top of the Parque Eduardo VII, a large and beautiful hillside park in the center of Lisbon. At the bottom of this park is the Praça do Marquês de Pombal, Lisbon’s largest and most important roundabout. In the center is a state of the Marquess of Pombal, one of the most important historical figures in Lisbon. Lisbon suffered a massive earthquake in 1755 that destroyed nearly all of the city, between the earthquake, fires, and resulting tsunamis. The Marquess was the head of the government and acted swiftly and efficiently, directing the rebuilding of Lisbon into the city it is today.

After seeing this, we walked back towards the river and walked into the Praça do Comércio, a large, beautiful plaza on the banks of the river. Prior to the aforementioned earthquake the plaza was the location of a royal palace, but the Marquess of Pombal transformed it during the rebuilding process to a square with buildings hosting the government’s economy, customs, and port offices. While in the plaza we watched the sunset and observed street musicians, sand sculptors, and lots of tourists before heading out.

After grabbing a quick dinner Manuel showed us one of the many miradouros (lookouts) scattered across Lisbon. This one in particular – the Miradouro de Santa Catarina – is a picturesque spot facing the river and is a popular spot for young people after dark. There’s always street bands playing and lots of bars nearby, which leads to crowds of young people sitting, talking, and enjoying a beer or two while looking out across Lisbon. The three of us stayed here for an hour or two before turning in early for the night, as we were absolutely exhausted and facing another early morning on Friday. 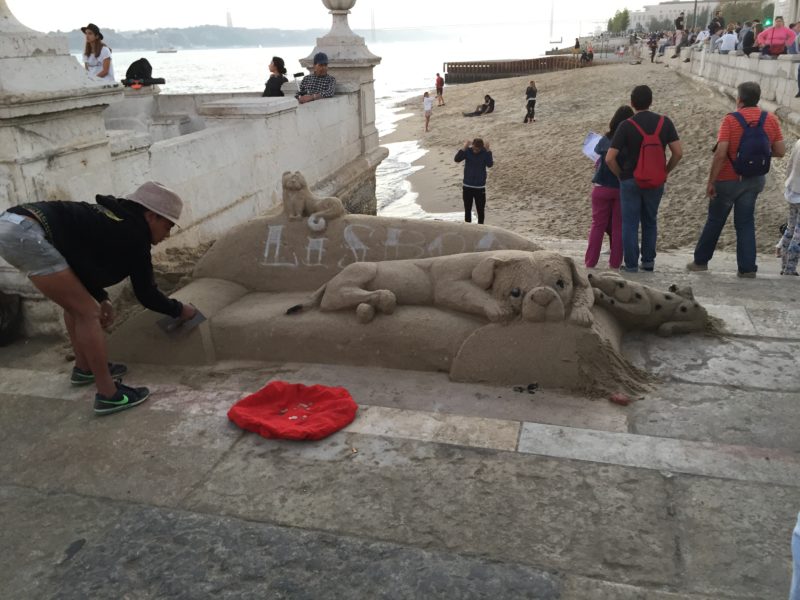 Friday: Sintra, more exploration, and a night out in Lisbon

Friday Andrew and I woke up early and made a day trip to nearby Sintra, which (as I previously mentioned) will warrant its own blog post I’ll write in the upcoming days.

Once returning from Sintra, Andrew and I again had a few hours to kill before Manuel was going to be free, so we headed towards some cool buildings we had spotted from one of the lookouts the day before. This lead us towards the Lisbon Cathedral, also known as the Santa Maria Maior de Lisboa in Portuguese, or simply Sé de Lisboa. We took a look around inside, and then found two really neat lookouts nearby where we again relaxed at for a while. This time, we had a view east towards another church, pantheon, and other cool buildings.

Eventually, we met up with Manuel and Roberto, a friend from his university, and we headed to a traditional Portuguese restaurant for a nicer dinner. I meant to order the bacalhau à brás, a famous cod dish from Portugal, but accidentally ordered the wrong thing and got instead a grilled cod, which was still decent. After dinner we met up with two of Andrew’s friends from Madrid that were also in Lisbon and we explored the nightlife a bit. We spent our time in the Bairro Alto (Upper District), a trendy, hip neighborhood with lots of bars and restaurants, and had a fun night.

Saturday was decided to be a relaxing day at the beaches, a day much needed! There’s a horde of amazing beaches all a hour or less from Lisbon, but without a car we weren’t able to go to some of the nicer ones. We were limited to the stretch of beach that heads west out of Lisbon towards the ocean, all which have train access. The most famous spot in this area is Cascais, a rich suburb of Lisbon famous for it’s vacationing activities. However, I had read about the hordes of tourists there and wanted to avoid that, so I found another beach that was also said to be very nice – the Praia de São Pedro do Estoril. The majority of our morning/afternoon we spent on the beach, including a small dip in the freezing water, and exploring the nearby rocky cliffs. We also made a quick trip to Cascais just to see what it was like.

On our way back into Lisbon we stopped in the town of Estoril. As many of my family and friends know, I’m a huge fan of the James Bond movies. The 1969 film On Her Majesty’s Secret Service features a lot of scenes filmed in Portugal, including the nearby beaches and the Hotel Palacio in Estoril, so I couldn’t help but make a stop to see it. In addition, the Estoril Casino has some unique history: during WWII it was known to be a hotbed of spies, royals, and other wartime personnel. This directly influenced James Bond author Ian Fleming to write Casino Royale, the first James Bond novel that spawned the entire franchise – as well as the Casino Royale movies.

When we got back into Lisbon we stopped at the Mercado da Ribeira and went into the Time Out Market, a section that has lots of upscale restaurants and bars, and tried two more famous Portuguese products: Port wine and Vinho Verde. Port is the famous fortified wine from the city of Porto and is red, sweet, and usually served with dessert. I can say that I didn’t like the Port we ordered very much, although to be fair, it’s the only Port I’ve ever tried. Vinho verde, which literally translates to “green wine”, is called that not for the color but meaning “young wine”, and are usually light, fresh, fruity, and almost sparkling. I liked the vinho verde much better than the Port!

Saturday night was much more relaxed than Friday; we grabbed a quick dinner and then returned to the same lookout from our first night and relaxed there again with Manuel and Roberto. 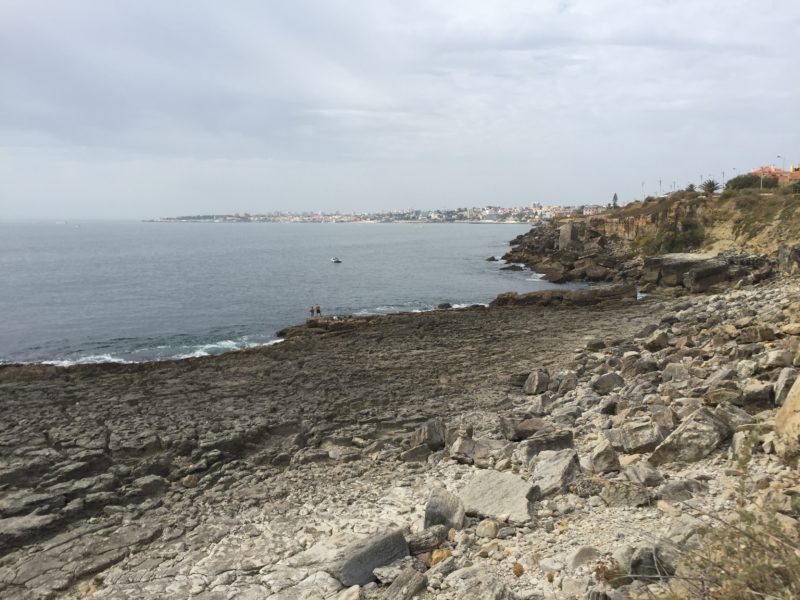 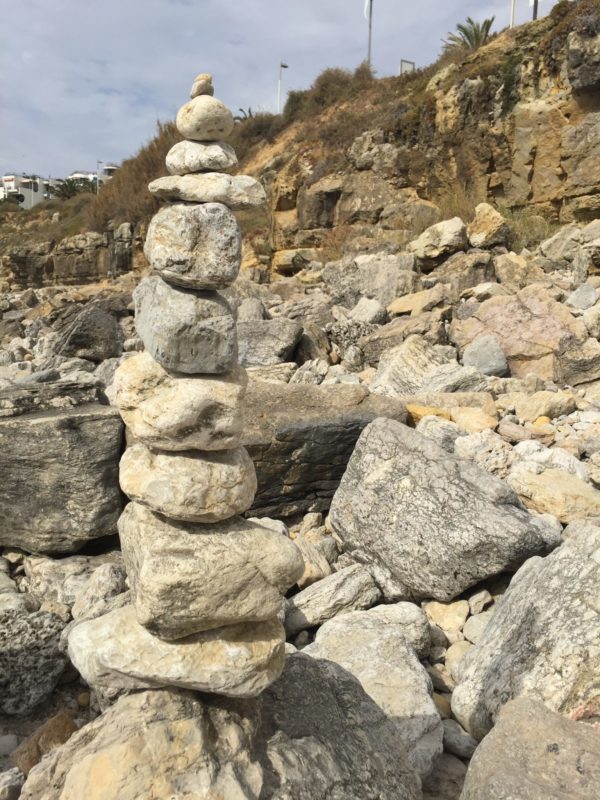 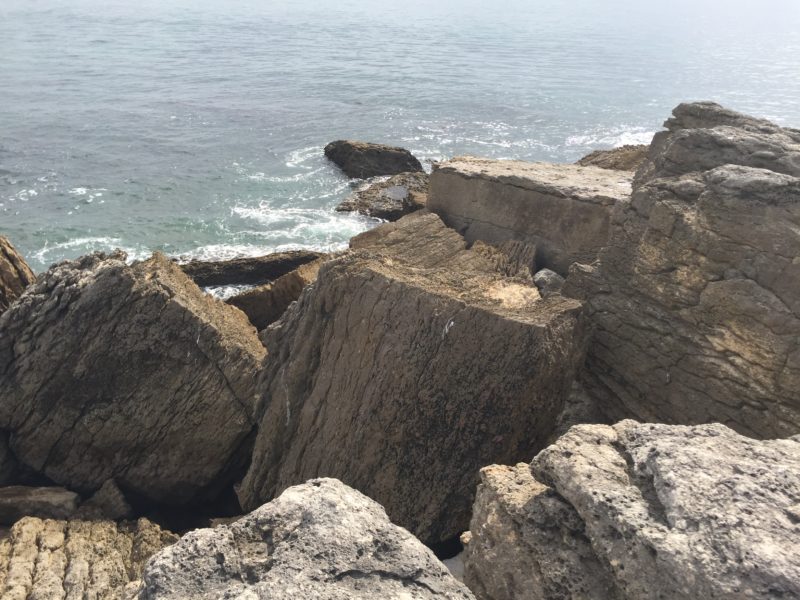 Sunday: Belém and our last hours

On Sunday we spent the majority of our day in nearby Belém, another day trip I’ll write about separately.

After returning to Lisbon, we spend our last hours before our bus left catching up on a few things we missed. We went back to the Time Out Market and got our last Portuguese meal, and I finally got to try the delicious bacalhau à brás – a mixture of cod, eggs, potatoes, and cheese, served with olives and salad! After the meal we caught some last views of Lisbon from yet more lookouts and then headed back to pick up our bags and head (very sadly!) back to Madrid. 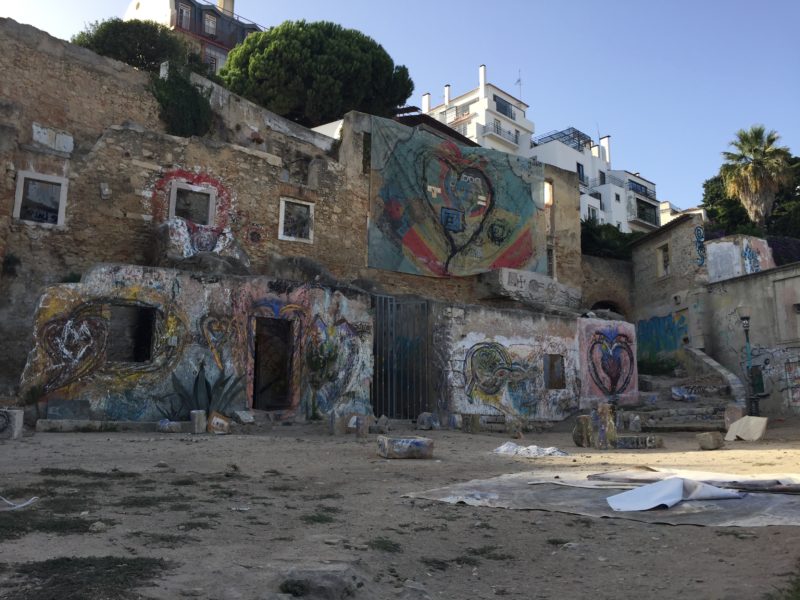 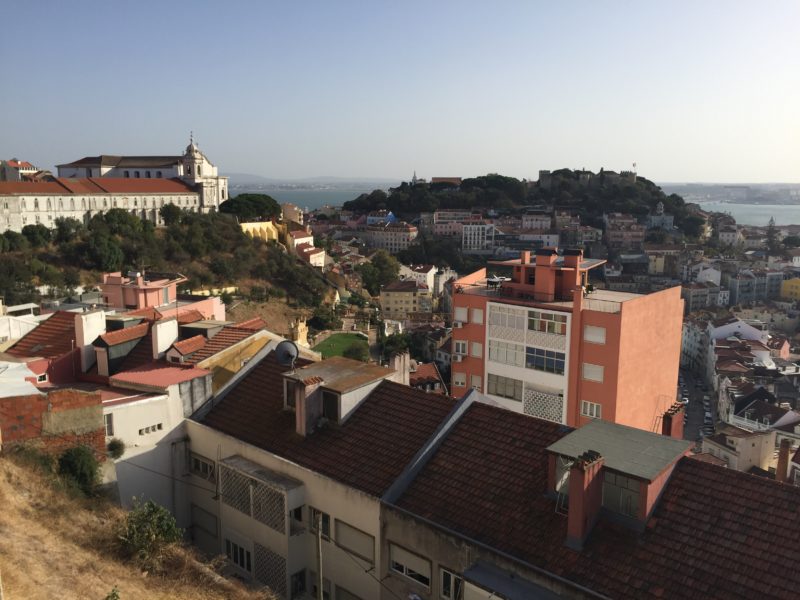