Hello readers! This past weekend I took a day trip with some friends to see Steve Aoki, a famous DJ, play at a club in nearby Toledo, so I figured to write a quick blog post on the day as it was quite an awesome experience. I went with myself, my good friends Greg, AC (short for Anne Catherine), and Chris, as well as a friend of Chris’ (all seen below).

Some quick background on the event: Toledo, known as the Imperial City, is an extremely famous city here in Spain that’s full of cultural sites and has played host to a variety of important historical events. It’s about an hour away from Madrid, so it’s a popular city to visit. There was a club that was having a re-opening and Steve Aoki was chosen as the headliner. Aoki is an American electrohouse DJ that’s collaborated with a variety of famous artists and has produced tons of recognizable hits. Fun fact: Steve Aoki’s father was a famous Japanese-American wrestler who also founded the Benihana chain of restaurants. The actual club was about 20 minutes outside of the city, so we never got into “real” Toledo, but the day itself was still full of awesome memories. With our Madrid metro passes we can actually get to Toledo on a bus for free, but many of us had gotten bus tickets through the club with our entrance tickets, so we decided to take that bus because it dropped us off at the club instead of downtown Toledo.

The bus to the club left from Madrid around noon and got to the venue around 1.30. The venue was quite literally on the side of the highway in the middle of nowhere; it was a super weird location! The club also had a walled-in area for “botellón”, which is basically drinking outside and socializing (essentially an outdoor party area). Seeing as how the club didn’t open for a few hours we were one of the first groups of people to arrive. We stayed around for a bit talking while we enjoyed some snacks and a beer before deciding to head out on an adventure.

Seeing as how we had a few hours to kill and we needed to eat food, we decided to walk ~40 minutes to Olías del Rey, a nearby small village to find some food and explore. Once arriving we were confronted your typical Spanish pueblo; very small and very picturesque. Unfortunately I didn’t take any pictures but it was what you think of when you hear “small Spanish village”.

Anyways, I digress back to my story. Because it was Saturday afternoon, most stores and restaurants were closed, but we managed to find a cafetería that was still open, so we wandered in and took a seat. Most of the day we were the only ones there, and it must have been a weird sight seeing five Americans wander into this extremely small village and eat at this cafetería! We ended up staying for a few hours, having a couple drinks with tapas, and we also ordered three different plates of Spanish foods to share. We started with a dish of carcamusa, a regional specialty of Toledo that’s a pork and vegetable stew that’s served with bread. After that, we got a plate of patatas bravas and finished with a plate of croquetas. Sometime I want to write a post on Spanish cuisine because the food here is phenomenal, but feel free to google any of those dishes to see what they are.

Once we finally paid the bill and left we headed back towards the club to get ready to party a bit more and head inside. Even though Steve Aoki was the headliner, he was actually performing between 7-9 pm, which is extremely early (especially in Spain!) because he had to get straight on a plane and head to Amsterdam to play in a club later that same night. However, during our walk back we had a mini-disaster occur. Before leaving the village we bought some cups, Coke, and Spanish rum to drink before entering the club. I was in charge of carrying the bag on the way back. Once we were probably three-quarters of the way back, the handle suddenly snapped, the bag fell, and everything broke! After staring in disbelief for a minute or two, Greg and I decided to run back to the store in Olías del Rey.

To put this into perspective, Greg used to row back in college, and he runs marathons and works out every day. While I’m not necessarily out of shape, Greg wasn’t joking when he said he was going to run back and buy another bottle. By the time we made it into town I was really behind and about to fall over! We had another setback when the store from earlier was closed, but after running around the town for a few minutes and asking a local where to go, we found one store that was thankfully still open. After buying another bottle (and asking for two bags this time!) we ran back to the club. Well, Greg ran back. I jogged most of the way and showed up a few minutes later than him! Although not the ideal circumstance, memories like that are the ones you’ll never forget and you’ll look back and laugh about down the road.

Once I finally staggered back we all stayed outside for an hour or so. The botellón area was much more packed this time around, and before too long a group of Spaniards next to us came over and introduced themselves. We ended up making friends with many of them and spent the rest of the night in the club with them!

Once we finally went inside and the music started, it was one of the most fun nights I’ve had in a long time. Steve Aoki was a great live act, doing crazy stunts and playing lots of awesome club music. At one point he played My Heart Will Go On from The Titanic, which was hilarious, and he played his new remix of the new blink-182 song Bored to Death. I can’t remind a time I was dancing for that long nonstop! 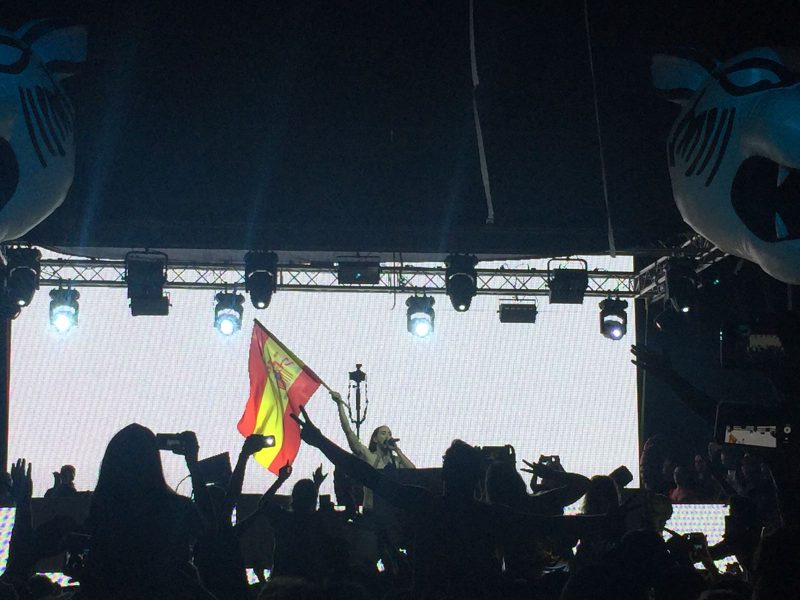 AC and I decided to leave once Steve Aoki was done playing. Although we had the bus tickets from the club back to Madrid, the buses didn’t start running until 3 am, and we didn’t feel like staying another ~6 hours at the club. AC, a huge Alabama fan, wanted to see the end of the Bama-A&M game and she also had another party to go to, and I wanted to go back and watch the Dodgers play the Cubs. There were still a couple buses leaving from Toledo that night (the last one was at 10.30) so we said our goodbyes and took a taxi to the Toledo bus station.

We arrived at the bus station with 20 minutes until the next bus, so AC suggested looking for food as she was quite hungry. We found a typical pizza/kebab-type place that you see here a lot in Europe, and ordered some food to go. Unfortunately, the place was packed, and our food took forever, so we ended up just barely missing our bus. Thankfully, we still had the 10.30 bus, so we just had to wait an extra half hour!

After taking the bus back (and sleeping the whole ride), we arrived in Madrid around midnight. By Spanish standards, we arrived pretty early; many Spaniards typically are just finishing dinner and getting ready to go out at that point. I briefly considered going out with AC, but I was exhausted from the long day (especially the running!) so I headed home and AC headed to her party. After getting home, I took a small nap before waking back up for the Dodgers-Cubs game, but I only watched the first five innings before going back to sleep, as the Dodgers were getting beat pretty badly. The next day when I woke up my body was extremely sore from all the dancing, but it was absolutely worth the fun night I had!

Note: I used a few photos taken by my friends in this post, so credit goes to Greg and Martin.