A few weeks ago my friend Andrew visited me for his spring break, and during his trip we got to explore Madrid a ton as well as take a few trips together. The most notable of these was to Toledo, a city I hadn’t technically seen (my previous Steve Aoki night wasn’t actually in the city). Before I forget too much about it I figured I should write a quick post and throw up some pictures. Unfortunately I didn’t have my camera and wasn’t super focused on taking pictures, so the ones I took aren’t up to my (admittedly high) expectations, but hopefully they paint a decent picture of what Toledo is like!

Quick note; There’s a couple more posts I’m behind on getting published, and my April playlist is almost done as well. The next two weeks we’re on break here in Spain so keep a close eye for more content to be posted!

Toledo is the capital city of Castilla-La Mancha and is situated about an hour south of Madrid. Castilla-La Mancha is one of Spain’s autonomous communities (the highest level of divisions in Spain, akin to states back in the US) and is famous for being the site of Miguel de Cervantes’ novel Don Quixote. Castilla-La Mancha is located primarily on the Meseta Central, a large plateau and plains region in the central of Spain, but also has some mountains as well. Think of brown and yellow landscape with windmills, olive plantations, and vineyards. Toledo itself is situated on a mountain and is located alongside the winding Tagus river (río Tajo in Spanish, and the longest river in the Iberian Peninsula), providing plenty of fantastic views all around.

Toledo itself is around 2000 years old, being referred to as an important city in ancient Roman history texts, and has had an extremely rich historical significance throughout the ages. It’s known as La ciudad de las tres culturas (the city of the three cultures) for its mixture of Christian, Muslim, and Jewish cultures. This mixture stems from its history – after the fall of the Roman Empire, it was controlled first by the Visigoths and then by the Moors. Years later, after Christians retook the country, Toledo was made the new capital. It’s also known as La ciudad imperial (the imperial city) for being the seat of the Holy Roman Empire during Charles V’s reign in the early 16th century.

Culturally, Toledo is known for a variety of interesting things. One more famous aspect to Toledo is its history as a steel-making city. According to Wikipedia, it has been involved in sword-making and steel-making since around 500 BC, and the Toledo steel from the area was known as unusually strong and hard. The impressive quality of the alloy led to swords from the city being the standard weaponry of the Roman legions. To this day, buying steel swords, knives, and pieces of armor are a very popular souvenir you can find in stores throughout the streets. In addition, Toledo was home to the famous Spanish Renaissance artist El Greco and houses a museum in his honor. Toledo has plethora of unique sights to see as well, each with historical significance, but I’ll get into some of those as I talk about…

Our day in Toledo

Andrew and I started off our day waking up early to catch the bus to Toledo. Thankfully, with my metro card buses to Toledo from Madrid are free, and even for Andrew it wasn’t too expensive. The bus station is in the north of the city, so we started there at the base of the mountain climbing our way towards the center. Unfortunately, the day was cold, cloudy, and windy, but that didn’t stop us from having a wonderful time. Seeing as how we only were taking a day trip, I found a nifty guide on Spain’s official tourism page with a single-day plan that I shaped to our interests. It was nice to find a route to see many of the sights following a planned path that didn’t involve backtracking!

The first interesting structure we saw was the Puerta de Bisagra Nueva, which is the main city gate of the city. A bit farther up the road we also saw the Puerta del Sol, another city gate. After a bit more (uphill…) walking, we found ourselves in the Plaza Zocodover, which was the central plaza and primary market of the city during ancient times. Surrounding the plaza was a bunch of beautiful buildings – a common site in Toledo, to be fair. After standing around a bit we made our way to the eastern edge of the city, on a cliff overlooking the Tagus river, which provided some great cliffside views. Directly across the river we were able to see the Academia de Infantería, which is a military training center and office.

On our way we previously had passed by the Alcázar de Toledo, a stone fortress that stands at the highest point of the city. It dominates much of the Toledo skyline and thus is one of the defining symbols of the city. Nowadays, the Alcázar contains a variety of offices, museums, and a library. The library, which occupies the southwest tower of the building, has a café on the top floor that we were able to walk into and enjoy some nice panoramic views above the city. Afterwards, we followed our handy online guide to La catedral de Santa María de Toledo, Toledo’s most prominent church. It’s one of the few high-gothic style churches in the country, and is considered one of, if the not the most impressive. We didn’t go inside, as it was a bit expensive, but we walked around it outside and enjoyed the ornate architecture. At this point, we were in the Plaza del Ayuntamiento, with the Ayuntamiento de Toledo (City Hall) directly behind us. 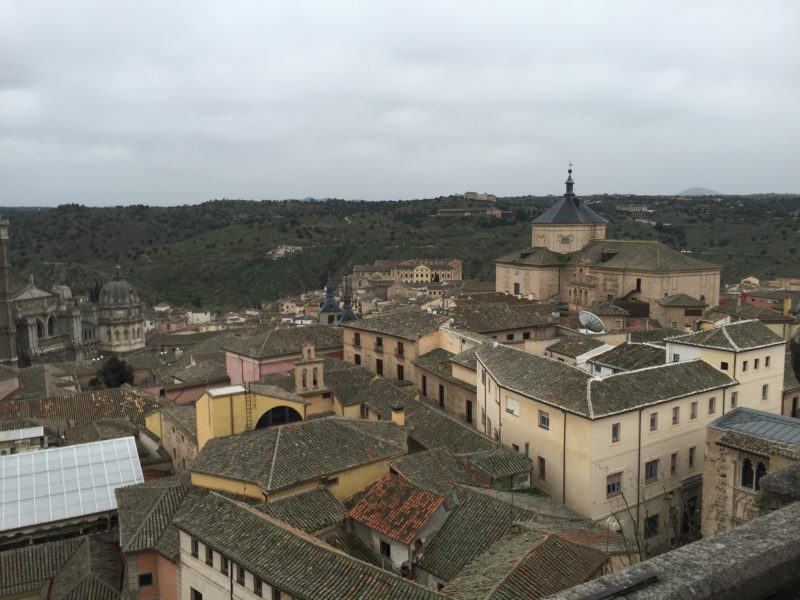 We next made our way to La iglesia de San Ildefonso, a Baroque Jesuit church named after San Ildefonso of Toledo, the city’s patron saint. This time we forked up the small entrance fee to enter inside. While the inside was nice, the primary attraction was climbing the bell towers. The church is supposedly built on the highest point of ground elevation in the city, so it also offered some amazing views. Unlike the Alcázar, this church also offered some views along the river to the south, which has a bunch of mansions that used to be the houses of the ruling elite in past days.

At this point we started to grow hungry, so we wandered the streets searching for a restaurant where we could order traditional food from the area. Eventually we settled on a place, and I ordered us three dishes that we split. The first was an appetizer of patatas bravas manchengas, the local take on patatas bravas, a famous Spanish dish that’s potato chunks served with a warm aioli / tomato sauce. This particular dish was stuffed and extremely delicious! Our two main dishes came next and were carcamusa, a stew-type dish with pork, potatoes, and other vegetables, and cochinillo, the suckling baby pig that’s a popular dish in this area of Spain. The most famous version is cochinillo from Segovia (think the famous picture of the chef cutting it with a plate and then throwing the plate to the ground), but Toledo’s version of the pig was just as delicious as well!

After lunch we lazily strolled around the Jewish quarter for a bit, seeing old synagogues and traditional Jewish architecture. As we made our way to the western edge of the town we passed by lots of smaller churches, museums, and parks – too many to name, but all of them beautiful and unique! One of the more interesting sights during the afternoon was the Convento de San Juan de los Reyes, a monastery that’s decorated on the outside with many sets of shackles. A quick google search showed that the shackles were the ones used by the Moors to hold Christian prisoners and were built into the church to celebrate the Christian victory over the Moorish people. One of the weirder coincidences happened while we were admiring the monastery when we ran into the soccer team from Mount St. Joseph University, a small Catholic university in Cincinnati. We ended talking to one of the coaches/trainers for a bit before heading our separate ways. 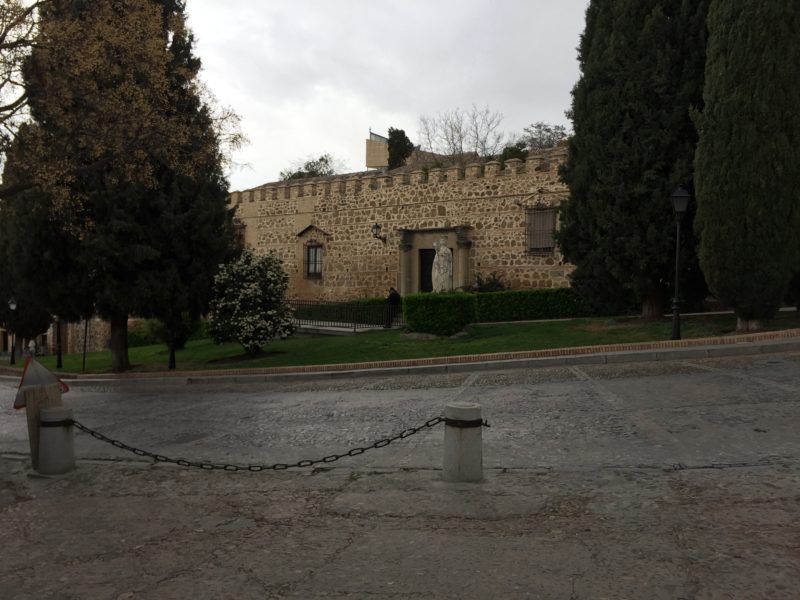 One of the last things we did was see the Puente de San Martín, a medieval bridge that stretches the Tagus river on the western side of the city. Some of views around the bridge and the river were the nicest we saw all day. There was a path that went down to the banks of the river that we walked along for a while. Signs posted on the trail said that the trail was part of the official route of Don Quixote, a 2,500 km (~1,500 mi) system of hiking trails throughout Castilla-La Mancha and surrounding areas! After returning to the bridge, we crossed it this time and attempted to hike up the mountain on the other side. After getting partially the way up the route was blocked as part of private property, but we were still offered some amazing views of the entire city – probably my favorite views of the whole day. At this point the sun was starting to set and it was starting to get colder, so we made our way back the bus station, satisfied with an awesome day exploring the city of Toledo!

One thought on “Toledo”