Hello all! Yesterday I went to Valencia, a city in the east of Spain on the Mediterranean coast, for the famous celebration of Las Fallas (Spanish) or Les Falles, (in Valencian). While Spain is known for it’s eccentric and wild festivals and holidays, Falles might be the most interesting of them all. It’s quite famous and definitely a “must-see while living in Spain” type of deal, so a few weeks ago I bought tickets with some friends to go. I’m pretty excited to write this post and share it with you because it was one of the most insane experiences I’ve had. For a brief overview, a very accurate quote about Falles:

“The scene at Las Fallas is extremely cathartic and difficult to describe, but resembles a cross between a bawdy Disneyland, the Fourth of July, and the end of the world!”

I’m going to first write a bit about the festival, it’s history, and what it is, and then I’ll share some stories from yesterday along with pictures and videos! Enjoy!

While the history of Falles has been disputed over the years, many historians usually agree it has origins that trace back to the medieval ages. Legend says that the town of Valencia was lit solely by street lamps and candles that rested on wooden planks called parots during the winter, but around the spring equinox – as days began to get longer – they were no longer necessary, so carpenters would throw them into a pile and burn them. This festival eventually gained a religious meaning as it became the festival of Saint Joseph (Jesus’ father), who is the patron saint of carpenters. Falles thus started to coincide with Saint Joseph’s feast day, March 19th.

Over the years, these burnings began to evolve and become more elaborate. Instead of burning excess piles of wood, carpenters began making statues and figures to burn. In it’s modern form these objects are known as les falles (sharing the name with the festival), or in it’s singular form, a falla. The falles are a bunch of ninots (dolls or puppets) combined into a grand display. Nowadays they’re typically made of paper-maché, plaster, polystyrene, and wood, which allows them to be very ornate and detailed. Additionally, they can be quite tall, surpassing 30m (100ft), which roughly translates to falles 4-, 5-, or even 6-stories tall.

The fantasy-esque ninots might look at first like they’re out of a Disney cartoon, but they’re usually satirical in nature; many take on forms of corrupt politicians or figures in current media. This year, for example, there were unsurprisingly a couple ninots of Donald Trump. Each falla is constructed under the direction of a casal faller, which are neighborhood groups that raise money all year and plan to build their own falla. Each group competes to create the best falla, assembling a detailed team of carpenters, artists, sculptors, and painters. These teams will work for months on end creating the ninots in preparation. Falles is such a big deal that there’s a neighborhood in Valencia (Ciutat fallera, or Falles City) specifically built to house the workshops and the accompanying industry. There are different categories of falles and there is some sort of competition, but I wasn’t ever clear on what the different categories are or how the awards worked.

According to Wikipedia, there’s around 750 casal falleres in Valencia, with a quarter of Valencia’s million inhabitants belonging to one. A casal can be any group of people – a school, professional association, etc. Each casal also builds a falla infantil, which is a “baby falla” that sits nearby the main falla. There’s typically around 370 falles and 368 falles infantiles, totaling nearly 800 falles throughout different neighborhoods sitting in intersections and parks. There’s also a falla municipal or falla ayuntamiento in the town’s center, which is the largest and most important of the festival. The falles can cost up to 75,000€ (the falla ayuntamiento can easily cost hundreds of thousands), with the total cost of a year’s falles reaching in the neighborhood of 8,000,000€!

The festival kicks off March 14th and 15th during la plantà, when each casal will parade the ninots throughout the city before constructing the falla in their designated location. After this, starting March 16th, the real festival begins. The next few days are a noisy, crazy, exciting time, as Valencia turns into one massive street party. The population of Valencia swells from 1,000,000 to 3,000,000+ during these days, as people wander the streets drinking, eating, and relaxing. As you wander down the streets admiring the falles you constantly pass street bands playing music, parades happening around every corner, and firework shows happening during the evening and night.

Street food is everywhere; food stands (imagine a state fair in America, but better food) sell churros, porras, and buñuelos (a Valencian pastry that looks like a donut but tastes more like a funnel cake), as well as traditional street food like kebab, patatas fritas (french fries) and castañas (roasted chestnuts), among others. In addition, many restaurants will open their doors and sell their food on the streets, often with a special menu just for Falles. Paella, the famous Spanish dish from Valencia, is also eaten a lot during the festival.

One of the more bizarre aspects of the festival are the petardos, or the firecrackers. Everywhere you turn there’s kids (and adults) with every shape and size of firecracker being lit. Some are more innocent smaller and quieter petardos, but many are extremely loud, resembling a canon. Throughout the entire duration of Falles, firecrackers are being set off, resembling the atmosphere of a war zone. Kids will wander around, nonchalantly light a petardo, toss it into a gutter, and walk away as it explodes. Definitely not a good place to go if you don’t like loud noises or have PTSD. I’m sure my mom, a former speech pathologist who worked with people with significant hearing loss, is cringing just reading this! Wikipedia sums up the experience with this sentence:

Away from the falles, people frolic in the streets, the whole city resembling an open-air dance party, except that instead of music there is the incessant (and occasionally deafening) sound of people throwing fireworks around randomly.

Throughout the entire festival, there’s a variety of events taking place. One of the most famous is la mascletà. A mascletà is a type of very large firecracker, and the event is a daily exploding of a bunch all at once. Each day a 2.00 p.m. in the town square, there’s a 6-7 minute nonstop shooting of these firecrackers. It takes place during the day, which suggests it’s true nature: these aren’t fireworks you look at, but rather ones you hear…and feel. While I wasn’t there for this event, the noise is supposedly around 120 decibels and is there to simply make your jaw drop at the sheer power.

The final day (and most famous) is known as la cremà (the burning), which was the day I attended. The climax of Falles, each falla is set ablaze at night. The event starts around 10.00 p.m. as each falla infatil is first lit and burned. Different varieties of falles are then burned starting around 11.00 and 12.00, with bigger ones starting later. Finally, the falla ayuntamiento is traditionally the last one burned, starting around 1.00 a.m. These times are more general guidelines, however, with each falla being burned when it’s ready and the area is safe.

During the daytime of la cremà the casals will begin to cut holes in the falla and load it with fireworks. At the start of the burning all the fireworks and firecrackers go off during a few minute-long show, with the fire either starting during or after this show. Each of the hundreds of falles have to be attended to by firemen, who set up barriers and control the blaze. As many of the falles are in neighborhoods in the streets, they have to be extra careful not to set any buildings or trees on fire. Oftentimes they’re constantly dousing the buildings, street signs, and trees as the fire burns to stop scorching. 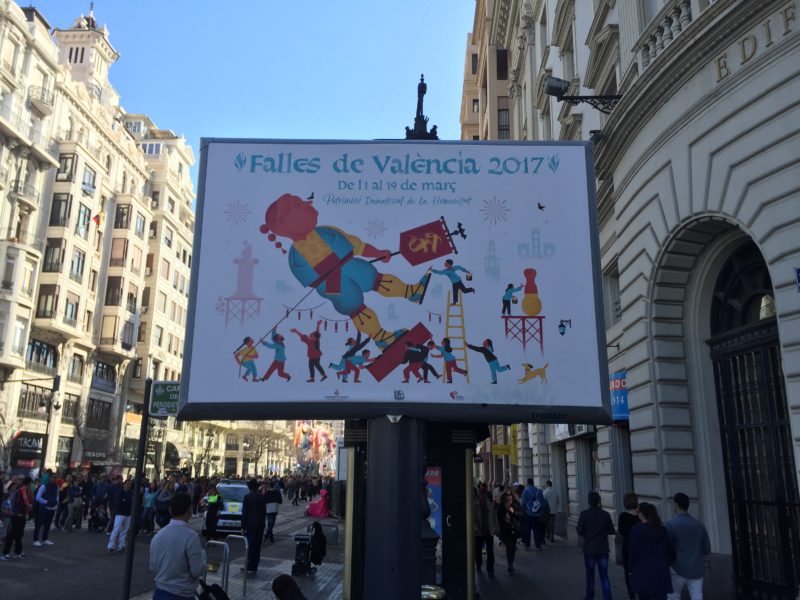 My experience at Les Falles

Now that you know everything possible about Falles I wanted to share a bit of my personal experiences. I went with a large group from Madrid that offered a cheap bus trip there for just the day. We left around 10.00 a.m. and got to Valencia around 2.30 p.m., and then stayed for just about 12 hours before heading back to Madrid. I went with three friends and then met up with some more that were already in Valencia. 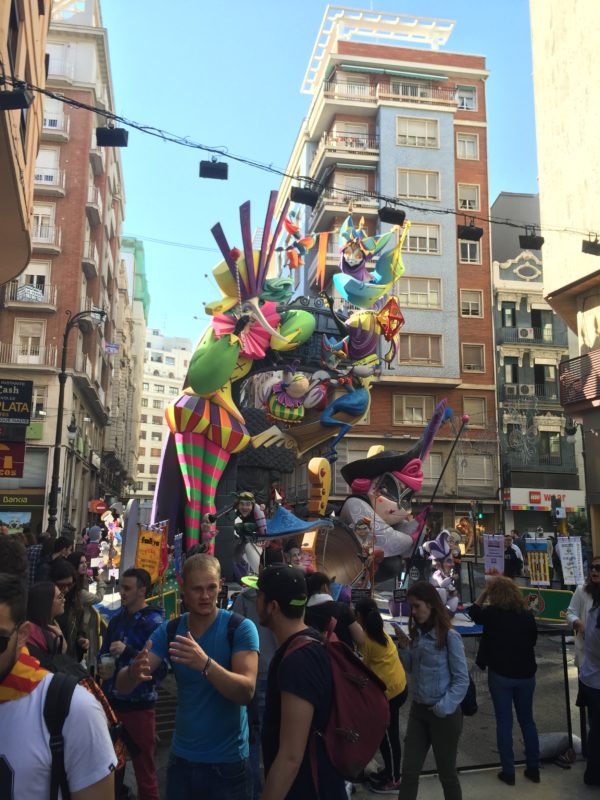 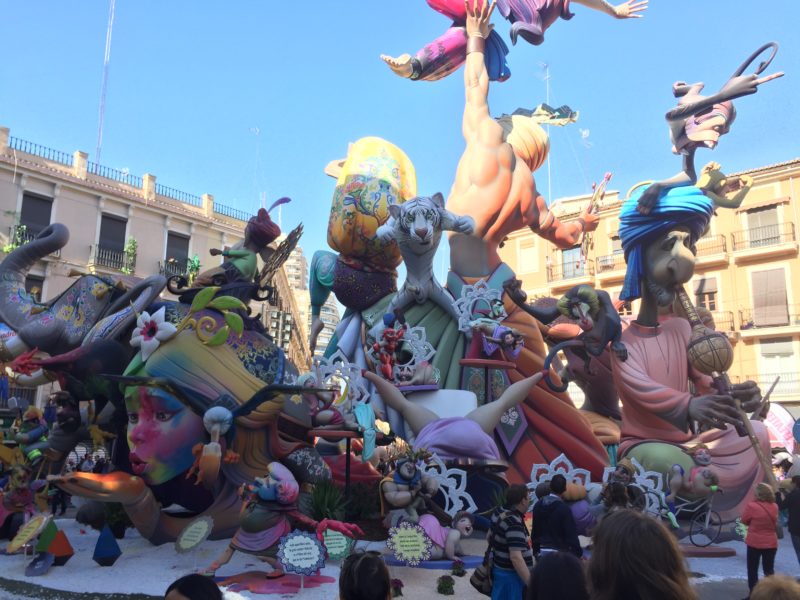 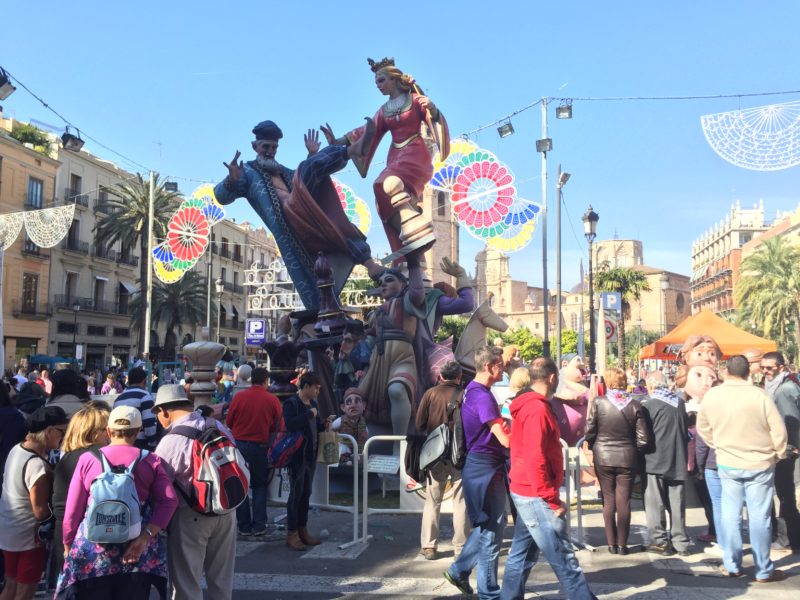 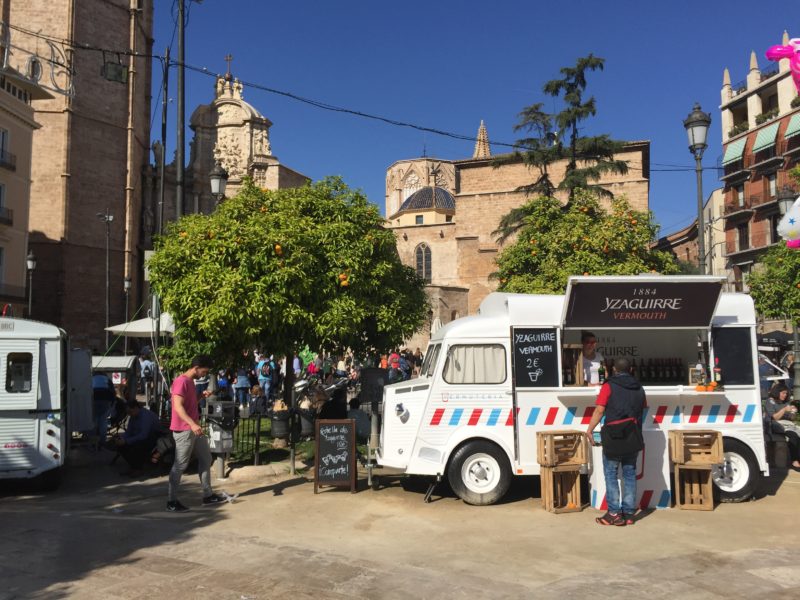 This particular year, the falla municipal was shaped like a proposed telecommunications tower, la torre de telecomunicaciones de Calatrava. From what I’ve gathered, it was a tower going to be built in Valencia that faced many obstacles and never actually happened, and the artists proposed the design as a general satire on everything that has been proposed and promised but failed to come to fruition. It was a whopping 40m (~131 feet) tall.

As previously mentioned, the most bizarre part of the day was the constant firecrackers. After a while you get fairly desensitized to the sound, but occasionally someone rudely sets off one of the larger petardos right next to you and…well, deafening hardly explains the experience. Twice yesterday this happened and it left my ears ringing (sorry Mom, it wasn’t my fault!), and by the end of the night when you’re exhausted it starts to get annoying. I can’t imagine what it’s like to actually live in Valencia during these days…I doubt they get a lot of sleep.

To put into perspective what it’s like, I took a 30-second video while we were sitting in a park yesterday. Play it and just listen to how many explosions you hear – and how loud they all are. Just imagine this for the entire day, and that’s what it was like!

Eventually, after an afternoon of wandering around and relaxing, we headed down an alleyway to have a good dinner of Valencian paella, which is a requirement if visiting the city.

By this point it was dark out and the festivities were starting, so we headed towards the center of the action. We caught a fireworks show in the center of the city and saw some of the falles infantiles getting burned, and then headed into the neighborhood with many of the falles. It’s recommended to pick one that you like and try to get there an hour or so before midnight to see the burning. We were able to get right at the front of one of the larger falla, although the firemen pushed the barriers farther back than I expected, so a tree partially blocked our view. Eventually the lights went off and fireworks started going up into the sky. After a few minutes of that, firecrackers inside the falla went off and it suddenly went up in blaze. The fire was massive, easily reaching the height of the large buildings on either side, and we definitely could feel the heat. I took a video of the beginning of the blaze, although it’s pretty bad quality and my phone was in vertical orientation, but I’ll add it at the very bottom if you wanna see. The thing that amazed me most was that this was one of 370 similar falles across the city, and that on essentially every block of this neighborhood the same experience was happening.

The falla burned for a while before being reduced to just the wooden frame. Eventually that burned away and fell down, prompting a large cheer from the crowd. At this point it was nearing 1 a.m. and we needed to head back to the buses for our 2 a.m. pickup, but on the way we walked past the falla municipal just in time to see it go up in a massive blaze. After a long bus ride, I finally made it back to my bed in Madrid around 7 a.m., exhausted but very happy with the day!